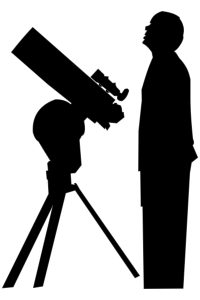 Mercury is at greatest eastern elongation on the 7th and is visible in the evening sky during the 1st half of the month. It is then at inferior conjunction on the 23rd. It sets at 17:25 at the start of the month in Sagittarius and is mag -0.7.

Neptune is visible in the evening sky in Aquarius. During the month, it is visible as soon as darkness falls and by month’s end, it sets at 20:40. It maintains its brightness at mag +7.9 during the month. It lies to the North East of Phi (φ) Aquarii, mag +4.2.

The best time to observe meteor showers is when the moon is below the horizon; otherwise its bright glare limits the number you will see especially the fainter ones. Below is a guide to this month’s showers.

The Quadrantids peak at 20:40 on the evening of the 3rd with a ZHR of 120. However the low position of the radiant makes a much lower ZHR more realistic. The radiant is roughly where the constellations Boötes, Draco and Hercules meet low in the North and is circumpolar. The meteors are of a medium speed – 42 km/s. The shower is named after a now defunct constellation Quadrans Mualis which lay between Boötes and Draco. No moon issues for this year’s shower.

There may be additional minor showers this month, details of which can be found in the below Information Sources and Links Section. The ZHR or Zenithal Hourly Rate is the number of meteors an observer would see in one hour under a clear, dark sky with a limiting apparent magnitude of 6.5 and if the radiant of the shower were in the zenith. The rate that can effectively be seen is nearly always lower and decreases as the radiant is closer to the horizon. The Zenith is the overhead point in the sky.

Asteroid (7) Iris is at opposition on the evening of the 13th and is mag +7.6. It can be found in Gemini and is visible as soon as darkness falls.

Finder charts and further information about other fainter asteroids can be found in the below Information Sources and Links Section.

Comet 67P/Churyumov-Gerasimenko is slowly fading. It is currently mag +9 and can be found in Cancer in January.  It is visible as soon as darkness falls during the month. It lies to the NE of Iota (ι) Cancri, mag +4.0 on the evening of the 14th.

Comet C/2019 L3 (ATLAS) is currently mag +9 and is predicted to peak during the month. It is at perihelion on the 10th. During the month, it is visible as soon as darkness fall in Gemini. It lies NE of Epsilon (ε) Geminorum, mag +3.1 at the end of the month.

Comet 19P/Borrelly is currently mag +10 and is predicted to be at its brightest on the 20th. It is visible as soon as darkness falls and sets at 22:00 during the month and moves from Cetus to Pisces. It lies to the W of Diphda (Beta (β) Ceti, mag +2.0) on the evenings of the 1st – 3rd.

Finder charts and further information about the above and other fainter comets can be found in the below Information Sources and Links Section. Any of the above estimates are based on current information at the time of writing the guide and can be wrong – “Comets are like cats; they have tails, and they do precisely what they want”, David H Levy. “If you want to have a safe gamble, bet on a horse – not a comet”, Dr Fred Whipple.

On the deep sky front this month, galaxies M81 and M82 can be observed in Ursa Major. In Andromeda, M31 – The Andromeda galaxy can be observed along with its satellite galaxies M32 and M110. In Perseus, there is the open cluster M34 and the excellent Double Cluster – NGC 869 and 884. In Triangulum, there is the galaxy M33. In Auriga there are three open clusters M36, M37 and M38 and also M35 in Gemini. Taurus has the excellent Pleiades – M45, the Hyades and also M1 – The Crab Nebula. Orion returns to our skies with M42 – The Great Orion Nebula and also Cancer with M44 – The Beehive Cluster.

Always keep an eye out for Aurorae. Other interesting naked eye phenomena to look out for include the Zodiacal Light and the Gegenschein. Both are caused by sunlight reflecting off dust particles which are present in the solar system.

The Zodiacal Light can be seen in the West after evening twilight has disappeared or in the East before the morning twilight. The best time of year to see the phenomenon is late-Feb to early-April in the evening sky and September/October in the morning sky – it’s then that the ecliptic, along which the cone of the zodiacal light lies, is steepest in our skies. The Gegenschein can be seen in the area of the sky opposite the sun. To view either, you must get yourself to a very dark site to cut out the light pollution. When trying to observe either of these phenomena, it is best to do so when the moon is below the horizon. A new appendix has been added explaining some of the more technical terms used in the guide.

Collins 2020 Guide to the Night Sky – All Rounder

The radiant is the point in the sky, from which (to a planetary observer) meteors appear to originate, i.e. the Perseids, for example, are meteors which appear to come from a point within the constellation of Perseus. When the radiant is quoted as “circumpolar”, it is never below the horizon and visible all night, otherwise the times quoted are when the constellation in which the radiant lies rises above the horizon in the East.

The full moon’s width when viewed from the Earth is 30 arc minutes or ½ a degree. This should give an idea for judging any distances quoted in the guide.

An asterism is a collection of stars seen in Earth’s sky which form simple patterns which are easy to identify, i.e. the Big Dipper. They can be formed from stars within the same constellation or by stars from more than one constellation. Like the constellations, they are a line of sight phenomenon and the stars whilst visible in the same general direction, are not physically related and are often at significantly different distances from Earth.

A conjunction is when two objects appear to be close to each other in the sky according to the perspective of the observer.

Mag is short for magnitude which is the measure of an object’s brightness. The smaller the number, the brighter the object. The brightest object in the sky is the Sun at mag -26, the full moon is mag -12 and Venus the brightest planet is mag -4. The brightest stars are mag -1. If there is a 1 mag difference between two objects – there is a difference in brightness of a factor of 2.5 between the two objects. For example the full moon is eight magnitudes brighter than Venus on average which means it is 1,526 times brighter than Venus. Objects down to mag +6 can be seen with the naked eye under very dark skies.

Local time is always quoted in the guide and this means for November – February – universal time (UT)/GMT is used and for April to September – daylight savings time (DST, = GMT+1). For the months of March and October when the clocks go forward/back respectively, both times will be used and attention should be paid to any times at the end of these months for that change.

Deep Sky Objects such as galaxies, nebulae and star clusters are classified in catalogues such as the Messier catalogue for objects like M44 – M for Messier. Another example of a catalogue would the New General catalogue whose objects have the prefix NGC. There are links for websites to both catalogues in the section above. 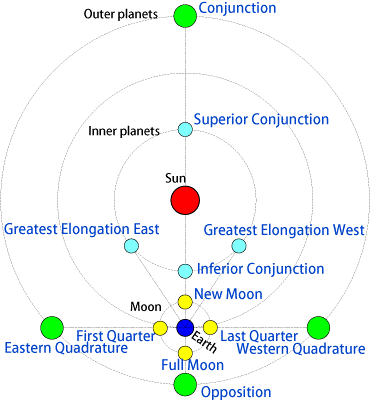 From Earth – Mercury and Venus are the inner planets in the solar system and Mars, Jupiter, Saturn, Uranus and Neptune are the outer planets. Below is a short guide as to how both the inner and outer planets move around the sun. The above pictorial guide should hopefully help in this.

These are best seen when at opposition and are not visible when at conjunction. Opposition occurs when the earth is between the sun and the outer planet. It is the best time to observe them because the planet is visible all through the night and it is due south and at its highest at about midnight. The planet is also at its closest point in its orbit to Earth – making it appear brighter. Conjunction occurs when the outer planet is on the other side of the Sun as seen from Earth.

The normal cycle for an outer planet is Conjunction – Western Quadrature – Opposition – Eastern Quadrature – Conjunction. After conjunction, the planet moves away from the Sun as seen from Earth and becomes visible again. The planet from this point on rises earlier and earlier in the morning sky and eventually becomes visible in the evening sky. At Western Quadrature it is at its highest at sunrise and by opposition it is in the same position by midnight. By Eastern Quadrature, it is past its best and is at its highest at sunset, meaning it is rising in daytime and setting earlier and earlier until a point when it sets too close to the Sun as seen from Earth and is no longer visible. The duration of this cycle will depend on the planet’s closeness to the Sun, i.e. Jupiter completes the above cycle in around 13-14 months.