The annual Perseid meteor shower is coming. The shower begins, gently, in mid-July when Earth enters the outskirts of a cloud of debris from Comet Swift-Tuttle.

Dust-sized meteoroids, hitting the atmosphere, will streak across the night sky, at first only a sprinkling, just a few each night, but the rate will build. By August 12th when the shower peaks, sky watchers can expect to see dozens, possibly even hundreds, of meteors per hour.

The easiest way to observe the meteors are to lie down on a sleeping bag or lounger with your feet pointed northeast, looking at approximately 30-45 degrees off the radiant. You’ll soon see meteors racing along the Milky Way. 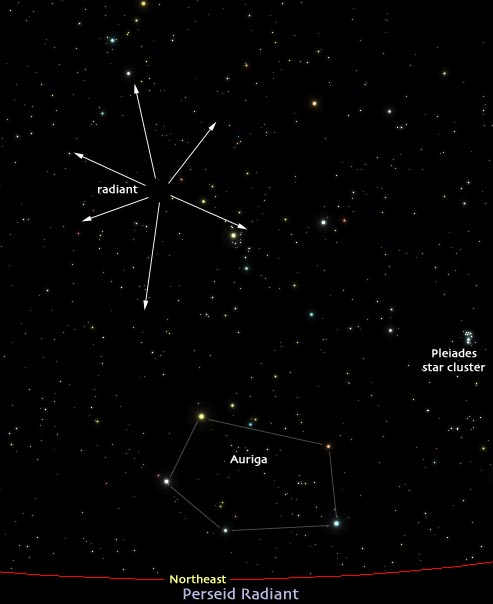 The Perseids are fragments of Comet Swift/Tuttle and are the fastest meteors of all often producing very bright fireballs and trains lasting several seconds. Photographing them is relatively easy. All you need is an ordinary SLR camera and tripod and some fairly fast film, such as ASA400, use the fastest lens you have, say F2, F1.8, and point your camera to about 50º up in the sky and about 40º from the radiant, for best results. Wide-angle lenses are not really suited to meteor photography, granted, they cover more sky, but the images will be very small and you will not pick up the fainter meteors on film. Don’t use too fast a film coupled with a long exposure of say 15 minutes or you will suffer from fogging from the skyglow, try ASA400 or ASA800 and exposures of between 5 and 15 minutes, and you should get at least the brighter meteors.

Also, make yourself a little lens hood from a piece of light cardboard to stop your lens dewing up during the exposure. You will also need a locking cable release plus a spare one just in case.

Unfortunately, meteor photography is a ‘hit-and-miss’ exercise, so be prepared to waste film, I have been known to use a roll of 36 exposures, and not get one meteor! As is more often the case, there will be a beauty just where the camera isn’t pointing so it’s better to have two (or more) cameras pointing in several different directions, in this way you can cover more of the sky and run the chance of catching that big fireball!

*Article Update*:Since this article was produced, obviously Digital SLR cameras are more common, more useful and less expensive to get great results, but I have kept the above info in here as the principle is the same.

For more information on the dates and times of various meteor showers please contact the Club Chairman, or post to our online public forum.

Saturn, The Lord Of The Rings