It seems that every year, the age-old question of the possible origin of the Star of Bethlehem is asked to stargazers. Was the so-called Christmas Star an unusual, eye-catching gathering of naked-eye planets, or was that fabled “sign in the sky” a meteor, comet, nova, or indeed something supernatural?

New knowledge of the old astrological beliefs and modern computer-based planetary tables may yet shed new light on this age-old question.

The Bible says nothing about the calendar date of the Nativity, but does refer to historical personages and events, such as the reign of King Herod. Modern historical research suggests that Herod may have died sometime between 4 BC and 1 BC by our present calendar. The Magi are said to have visited Herod just before he died, and presumably the birth of Christ and appearance of the Star came sometime before that.

And it is very doubtful that Jesus was born in late December. For one thing, the Biblical passage in St. Luke, “And there were in the same country shepherds abiding in the field, keeping watch over their flock by night,” indicates that spring is the likely season; that was when the shepherds in Judea were tending the newborn lambs.

In ancient times, Dec. 25 was the date of the lavish Roman festival of Saturnalia. It was a time when gifts were exchanged; homes, streets and buildings were decorated; people came home for the holidays and everybody was in a happy, party mood. It has been said that early Christians chose the date of the Saturnalia in order to avoid attention and thus escape persecution.

When the Roman emperor Constantine officially adopted Christianity in the 4th century, the date of Christmas remained Dec. 25.

Christ’s birth almost certainly did not occur at 1A.D. Our present chronology by which the years are numbered as AD or BC was conceived by the Roman abbot Dionysius Exiguus around 523 AD.

Unfortunately, Dionysius made two significant errors in his calculations. The first was his placement of 1 AD immediately following 1 BC, completely disregarding the mathematically required 0 in between. Back then in Europe, zero was not considered a number. So, for instance, the year we now call 3 BC, is actually –2 numerically speaking.

Second, Dionysius accepted the statement of Clement of Alexandria that Jesus was born in the 28th year of the reign of the Roman emperor Caesar Augustus. But Dionysius failed to realize that during the first four years of his reign this Roman ruler was known by his original name Octavianus, until the Roman senate proclaimed him “Augustus.” So here alone we have an error of four years, but by the time it was realized our chronology was too well entrenched to be changed.

As for the time for the appearance of the Star, most astronomers and Biblical scholars believe that it most likely occurred sometime between the years 7 and 2 BC. So this is the time frame that we need to explore to determine if there was anything unusual in the sky that might have caught the attention of the Magi.

Also, let us remember that contrary to popular nativity scenes, the wise men (Magi), were not present at the time of Jesus’ birth, as it says it Matthew 2…

“2:11And when they were come into the house, they saw the young child with Mary his mother, and fell down, and worshipped him: and when they had opened their treasures, they presented unto him gifts; gold, and frankincense, and myrrh.”

…but they did come to see Jesus before he was 2 years old as Herod the King ordered that all the children of Bethlehem below 2 years old were to be killed.

From St. Matthew 2, we can discover many facts about the star of Bethlehem as highlighted in the text below.

“2:1Now when Jesus was born in Bethlehem of Judaea in the days of Herod the king, behold, there came wise men from the east to Jerusalem, 2:2Saying, Where is he that is born King of the Jews? for we have seen his star in the east, and are come to worship him. 2:3When Herod the king had heard these things, he was troubled, and all Jerusalem with him. 2:4And when he had gathered all the chief priests and scribes of the people together, he demanded of them where Christ should be born. 2:5And they said unto him, In Bethlehem of Judaea: for thus it is written by the prophet, 2:6And thou Bethlehem, in the land of Juda, art not the least among the princes of Juda: for out of thee shall come a Governor, that shall rule my people Israel. 2:7Then Herod, when he had privily called the wise men, enquired of them diligently what time the star appeared. 2:8And he sent them to Bethlehem, and said, Go and search diligently for the young child; and when ye have found him, bring me word again, that I may come and worship him also. 2:9When they had heard the king, they departed; and, lo, the star, which they saw in the east, went before them, till it came and stood over where the young child was. 2:10When they saw the star, they rejoiced with exceeding great joy.”

Jupiter has been known from ages-old to the present as the King Planet. In ancient times, planets like Jupiter were considered “wandering stars.” Since humans have assigned kingly qualities to this giant wanderer for dozens of centuries, might it have something to do with our Star announcing the birth of a king? To be Matthew’s Star, Jupiter, as viewed from Earth would have to do peculiar things. More precisely, as considered by a magus viewing from the Middle East during the years 3 and 2 BC, Jupiter’s movements would have to satisfy all nine identifying characteristics of the Star. On 14th September of 3 BC at the time of the Jewish New Year, Rosh ha-Shanah, Jupiter began to do just that. 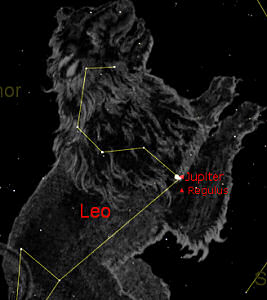 A magus watching Jupiter that September saw two objects moving so close that they appeared to touch. This close approach of celestial bodies is sometimes called a ‘conjunction’. Our Middle Eastern viewer saw Jupiter coming into a close conjunction with the star, Regulus. Regulus takes its name from the word root which yields our word ‘regal.’ The Babylonians called Regulus Sharu, which means ‘king.’ The Romans called Regulus Rex, which means ‘king.’ So to start things, at the beginning of the new Jewish year, the Planet of Kings met the Star of Kings. This conjunction may have indicated kingship in a forceful way.

In 3/2 BC, Jupiter’s retrograde wandering would have called for our magus’ full attention. After Jupiter and Regulus had their kingly encounter, Jupiter continued on its path through the star field. But then it entered retrograde. It “changed its mind” and headed back to Regulus for a second conjunction. After this second pass it reversed course again for yet a third rendezvous with Regulus, A TRIPLE CONJUNCTION. A triple pass like this is more rare. Over a period of months, our watching magus would have seen the Planet of Kings dance out a halo above the Star of Kings. A coronation.

The Jewish nation is composed of twelve ancient tribes. Jewish prophecy states that a particular tribe will bring forth the Messiah: the tribe of Judah. The symbol of Judah’s tribe is the lion. You can see these connections in an ancient prediction of Messiah’s coming found in the first book of the Bible, the Book of Genesis, Chapter 49.

“49:9Judah is a lion’s whelp: from the prey, my son, thou art gone up: he stooped down, he couched as a lion, and as an old lion; who shall rouse him up? 49:10The sceptre shall not depart from Judah, nor a lawgiver from between his feet, until Shiloh come; and unto him shall the gathering of the people be.”

This association of Messiah with the tribe of Judah and with the lion is a productive clue. It clarifies the connection between Jupiter’s behaviour and the Jewish nation, because the starry coronation—the triple conjunction—occurred within the constellation of Leo, The Lion. At this time, the wise men would have started their journey westward towards Judea to find this newborn king.

After the triple conjunction, In June of 2 BC, Jupiter, the Planet of Kings traveled on through the star field toward another spectacular rendezvous, this time with Venus, the Mother Planet. On June 17, at 8:30 p.m. local time, Jupiter and Venus drew to within a mere 0.4 of an arc minute of each other while appearing to hover some 15º above the western horizon. To the Magi the two brightest planets must have appeared to coalesce into one and glowed before them like a dazzling beacon over Judea. If our magus had had a telescope, he could have seen that the planets sat one atop the other, like a figure eight. Each contributed its full brightness to what became the most brilliant star our man had ever seen. Jupiter completed this step of the starry dance as it was setting in the west. That evening, our Babylonian magus would have seen the spectacle of his career while facing toward Judea. 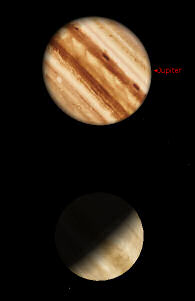 Finally, to qualify as the Star, Jupiter would have to have been ahead of the Magi as they trekked South from Jerusalem to Bethlehem and also stop moving in the sky and appear to hover over Bethlehem. Sure enough, in December of 2 BC if the Magi looked south in the early hours before sunrise, there hung the Planet of Kings over the city of Messiah’s birth. Perhaps you have already anticipated the key to this final mystery: retrograde motion. An astronomer tracking the movement of planets through the star field watches not so much on the scale of minutes, but on the longer scale of days, weeks and months. On this scale of time, Jupiter did stop. On December 28 of 2 BC as it entered retrograde, Jupiter reached full stop in its travel through the fixed stars. Magi viewing from Jerusalem would have seen it stopped in the sky above the little town of Bethlehem.

Conclusion
While all of this evidence could be brushed aside by mere coincidence, we can see a deeper and even more amazing truth. Since before the world was created, God predestinated the order of life and motions of the universe so that the event of Jesus’ birth would take place with all of these signs pointing to His birth. What a marvelous God we have who so ordered creation so that the motions in the solar system would spell out the Messiah’s birth. We can also use the same method for dating the crucifixion. Perhaps it will not surprise you to learn that only one Jewish Passover lunar eclipse was visible from Jerusalem while Pilate was in office. It occurred on April 3, 33 AD, the Day of the Cross.