The challenge presented to astronomers by poor climate seems nowhere to have been more strikingly accepted than in Ireland during the nineteenth century. Armagh and Dunsink observatories had already come into being, though they had only small instruments, Col. Edward Joshua Cooper M.P., had in his observatory at Markree Castle, Co. Sligo, what was briefly the largest refractor in the world, with a 13?-inch objective. Lord Rosse at Birr Castle, Co. Offaly had built the largest reflector in the world, the 72-inch “Parsonstown Leviathan”, which nowadays would seem to be an act of sheer folly. However, this did not deter other wealthy amateurs from following his lead, and, indeed we can be fairly certain that his example was followed by William Edward Wilson.

Wilson was born in 1851, the only son of John and Frances Wilson of Daramona House, Streete, Co. Westmeath, Ireland. His father was a man of intellectual capacity who in 1885 published “Thoughts on Science, Theology, and Ethics” and was the greatest single influence on his son, being privately educated at home because of delicate health, and therefore, had no normal school or university education. 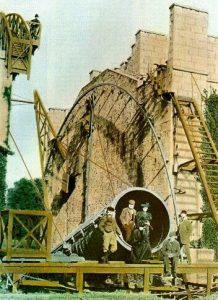 The Great Parsonstown Leviathan. The Fourth Earl of Rosse is standing on the right, with Dr Otto Boeddicker on the left.

His first recorded venture in astronomy was in 1870 when he travelled to Oran, Algeria to observe and photograph the total solar eclipse of December 22nd.

The following year, 1871, he acquired from Sir Howard Grubb of Dublin, a reflector of 12 inches (30.5 cm) aperture and set it up in a dome in the garden of Daramona.

With this instrument, he experimented with photography of the moon utilizing wet plates and began his study of solar radiation using thermopiles. In the same building, there was also a small transit instrument. 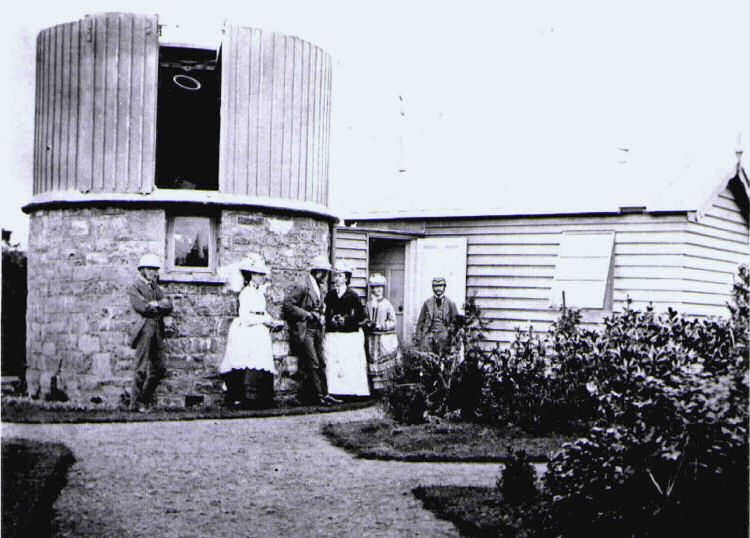 The only known photograph showing the first Grubb reflector, the 12-inch. Note the Transit House on the right. William’s father and mother, John and Frances are standing left of the door, while William is on the left. The other subjects are not identified though the two ladies may be William’s sisters, Elizabeth and Dorothea. The photograph is dated 1875. 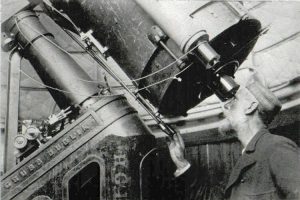 William’s father John at the eye-end of the Great 24-inch reflector. 1882.

In 1881, a Grubb reflector of 24 inches (61 cm) aperture and a new dome replaced the original telescope and dome. At first the mounting of the 12-inch was used but this was replaced by a new Grubb mounting in 1892 that had an electrically controlled clock drive. The new telescope was mounted atop a large pier in a two-storey vine [ivy?] covered tower attached to the house. Adjoining the observatory were a physical laboratory, a darkroom, and a well-equipped machine shop, which had been added in 1889.

Wilson freely made his telescope available to his scientific friends and colleagues, among whom were Professor George F. Fitzgerald, Dr. Arthur A. Rambaut, later Director of the Radcliffe Observatory, Oxford, Peter L. Gray of Mason College Birmingham, and George Minchin Minchin, later professor of mathematics at Cooper’s Hill College, London. 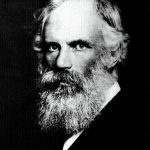 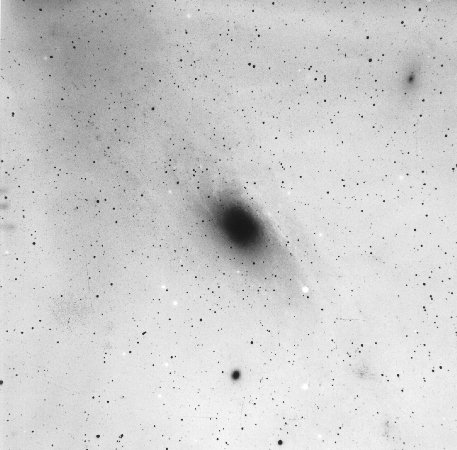 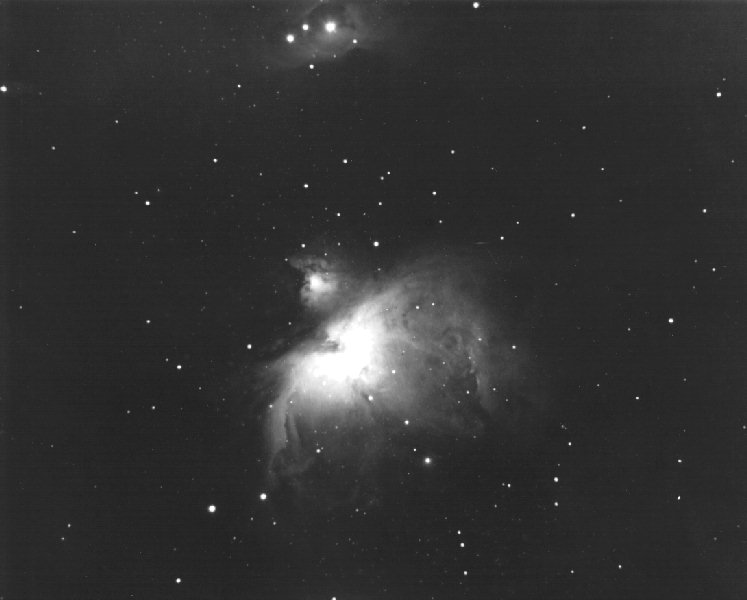 From 1893 onwards Wilson took a series of astronomical photographs, which at the time were of unequalled high quality. In spite of this fact, Dr. Andrew A. Common took a somewhat inferior photograph of the Orion Nebula in 1883 for which he was awarded the Gold Medal of the Royal Astronomical Society. While the photograph taken by Common shows more detail in the central regions of the nebula, Wilson’s photograph shows more detail in the outer regions. Among the people to use Wilson’s photographs in print were Agnes M. Clerke in her book “Problems in Astrophysics” (1903) and Sir Robert Ball in his “A Primer of Astronomy” (1911).

One of Wilson’s main research efforts was in determining the temperature of the sun. Most of this work was done with P.L. Gray and they used a “differential radio-micrometer” of the sort invented by C.V. Boys in 1889, which combines a bolometer and galvanometer into one instrument. The result of their measurements was an effective temperature of about 8000°C for the sun. After a better determination of absorption in the earth’s atmosphere was made, this value was corrected to 6590°C, which is very close to the modern value of 6075°C.

Professor G.M. Minchin carried out the Daramona work on the photoelectric detection of starlight using Wilson’s 24-inch telescope. However, Fitzgerald and William H.S. Monck, using Monck’s 7-inch refractor at Earlsfort Terrace, Dublin, had carried out the original work in 1892. They were only able in their study to establish a photoelectric effect for Venus, Jupiter and possibly Mars, but they failed to detect Vega and Capella. The work was transferred to Daramona, and in 1895, Minchin, Wilson and Fitzgerald were able to obtain deflections from Jupiter, Deneb, Vega, Arcturus, Regulus, and Saturn.

Other activities of Wilson included observing the transit of Venus on the afternoon of December 6th 1882 with the 24-inch stopped down to 12 inches. Using a visual spectroscope, he looked for absorption lines from the outer atmosphere of the planet — but without success. At Daramona, the sky was cloudless all day, for we know that Wilson observed “in the forenoon” trying to spot a Venusian satellite, but none was found! While over at Dunsink Observatory, near Dublin, Sir Robert Ball (using the South 12-inch refractor), was hampered by heavy snow showers some of which lasted all that morning! Dr J.L.E.Dreyer using the Thomas Grubb 15-inch reflector stopped down firstly to 11 inches and later to 7 inches also observed this transit from Armagh, as did Dr William Doberck from Markree using the big refractor stopped down to 5 inches.

On photographs of the Dumbbell Nebula that he took in 1894, Wilson attempted to determine the proper motion of stars by comparing positions measured on the photographs with positions given by Otto Struve from micrometer observations made at the Pulkova Observatory in 1851. Wilson found motions for six of the most prominent field stars of about five seconds of arc over the 42-year interval — values now considered much too high.

On August 9th 1898, Wilson took the first cinematograph of a sunspot, and on August 13th he took a cinematograph comprising 400 photographs of a sunspot between 10:45am and 2:30pm. The cine was sent to G.E. Hale in October 1905. Among other experiments performed by Wilson we mention: On August 16th 1896, he photographed the bones in a man’s arm for Dr. Ardagh — could this have been the first attempt at X-ray photography?

On December 4th 1898, Wilson was again experimenting with X-rays. Using a fluorescent screen he photographed a portrait of Sir Phillip Sidney only to discover another one of him in profile beneath the present one.

During a joint Royal Irish Academy — Royal Dublin Society eclipse expedition to Spain in May 1900, Wilson along with Rambaut, Grubb and Joly observed and photographed the total solar eclipse from Plasencia. Joly obtained some good results, including two colour plates. He took many photographs of the other equipment used, and also the local residents who came to watch. He even photographed a local donkey that brayed throughout the eclipse! 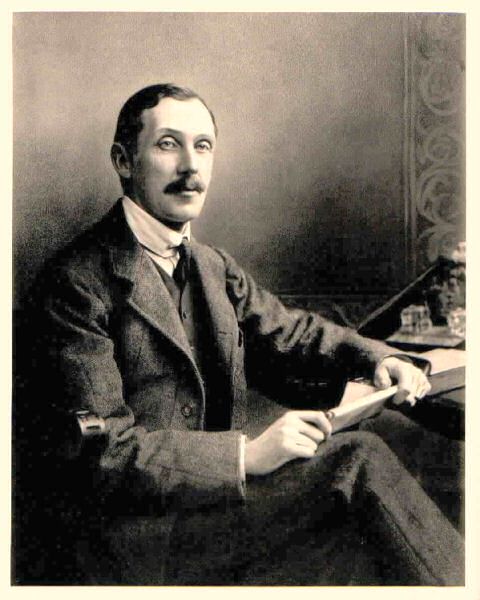 Shortly before his death in 1908, Wilson was again back in his laboratory working on solar physics, devoting much time to an ingenious integrating sunshine recorder that depended on the distillation of a volatile liquid for its operation.

Although Wilson’s life was not a long one, it was both successful and tranquil. He married in 1886 and had a son and two daughters. His father predeceased him by only two years, and this was a heavy blow to him.

He was a most loveable character: earnest, sincere, and unassuming. The charm of his manner was apparent even on the shortest of acquaintances. It revealed at once sympathy, thoughtfulness, and gentleness. His grave handsome face revealed the naive and beautiful character, which won for him so many friends.

Wilson was elected a Fellow of the Royal Society in 1896 and called it “an unexpected honour”; and in 1901, he received the degree of Doctor of Science from the University of Dublin. At the ceremony, he elected to wear the gown of his good friend Professor Fitzgerald. He also held the office of High Sheriff for Co. Westmeath in 1894.

Following Wilson’s death the 24-inch was very little used and in 1922, the family moved to live in England after having lived for some time at Kilnahard Castle, Mountnugent, Co.Cavan. By his will, Wilson left the telescope to the Radcliffe Observatory, Oxford, and his physical equipment to Trinity College, Dublin. 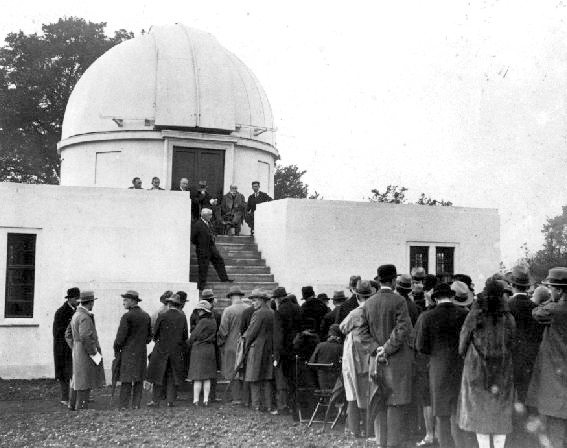 In any event, Wilson’s son, John Granville Wilson offered the telescope to the University of London on condition that an appropriate building would be erected to house it. The Senate of the University made a grant of £5000 for the purpose, and a site at Mill Hill was leased from the local Council. Building began in 1928 and the Astronomer Royal, Sir Frank Watson Dyson, formally opened the Observatory in October 1929.

Miss E.M. Peachey (now Professor Margaret Burbidge) used the telescope for spectroscopic research, including her classical investigation of Gamma Cassiopeiae; but from about 1951 it was used more and more for teaching students. It was finally retired in 1974 and was presented to Merseyside County Museums where it has undergone extensive restoration and is now on show to the public in a new Astronomy Gallery at the Liverpool Museum.

Almost nothing remains of the Wilson archives from Daramona. Wilson’s grandson, Mr. John Wilson, has a number of letters of thanks for the gift of his grandfather’s book; “Astronomical and Physical Researches made at Mr. Wilson’s Observatory, Daramona, Westmeath” published privately by him in 1900. 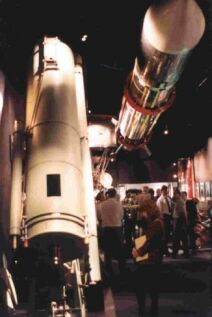 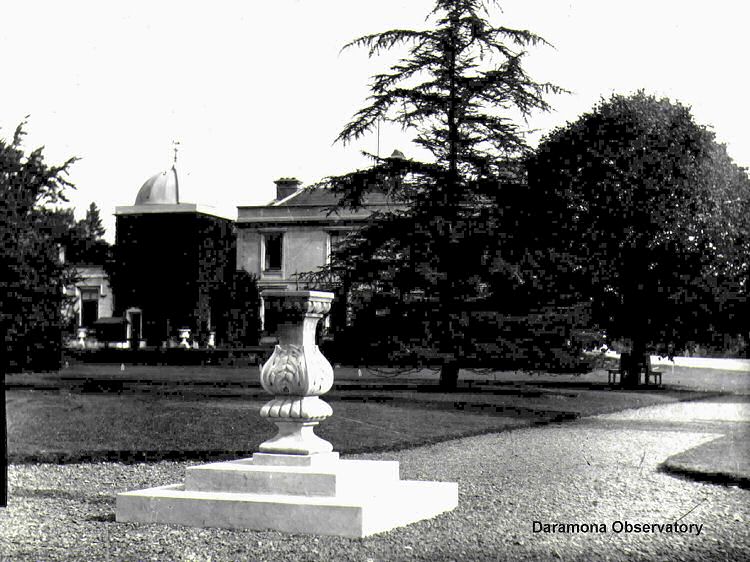 A number of astronomical plates were found at Mill Hill but are now in the National Museum of Photography, Film and Television, Bradford. In September 1991, Patrick G. Corvan (Armagh Planetarium), and the author visited Daramona and found that a number of astronomical and domestic plates still exist but nothing now remains of an instrumental nature.

There were numerous plates showing photographs of the sun, some of which were taken by means of the 15-inch polar siderostat that Wilson had on loan from the Royal Society of London. This instrument was mounted on the lawn to the side of the observatory and the image of the sun was directed to the laboratory by means of a round hole cut in the door. This instrument was also used in the solar temperature experiments mentioned above. Some plates were also taken by means of a 4-inch refractor.

William Edward Wilson died at Daramona in July 1908 within a few months of his contemporary, the Fourth Earl of Rosse, and was laid to rest in the family burying ground in Streete, Co. Westmeath, Ireland. 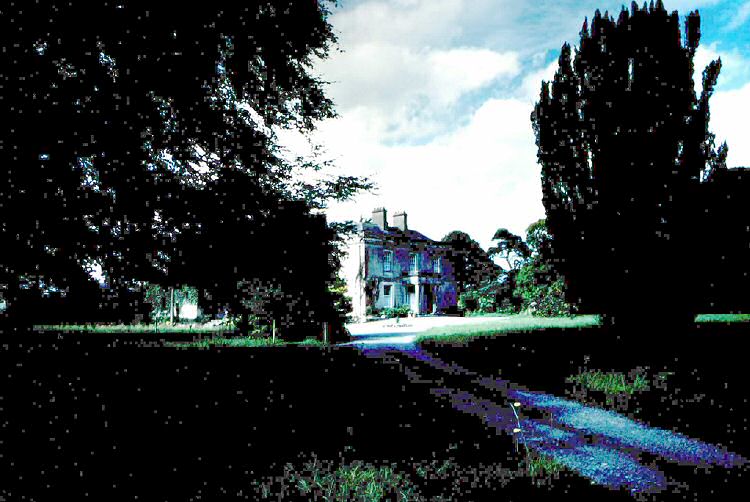 I am most grateful to Mr. John Wilson for making available many of the photographs and other material relating to his grandfather.