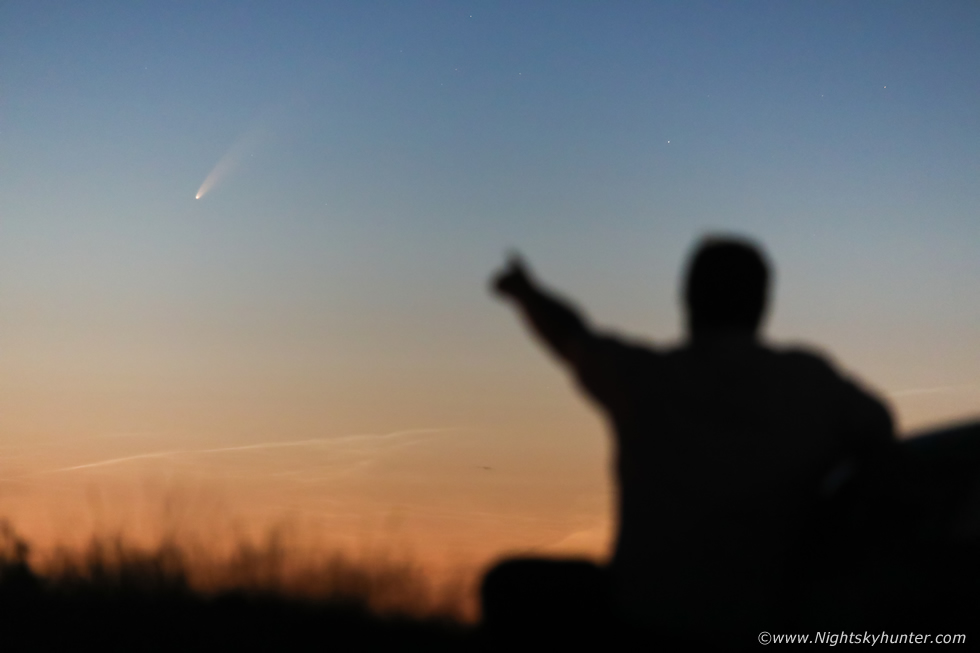 When will the next bright comet appear? This was the question on every stargazer’s mind over the last few years. On average a good naked eye comet should appear every decade or two, however if you live in the northern hemisphere like we do then this statistic offered much scepticism. The last ‘proper’ naked eye comet to grace northern skies was C/1995 O1 Hale-Bopp in 1997, this comet made it into the ‘great’ category and broke records by being visible for 15 months without optical aid, many members will vividly recall this wonderful comet and for some, like the author of this article, it was the comet which cut many of our sky teeth on.

We have had many cometary visitors since those glory days, who can forget the historic outburst of 17P/Holmes in 2007 or the beautiful tail on 153P/Ikeya-Zhang visible to the naked eye during the Spring of 2002. Our most recent celestial visitor worthy of addressing was of course C/2011 L4 Pan-STARRS in 2013 which formed a beautiful conjunction with Messier 31, both celestial objects were visible with the unaided eye as ghostly phantoms, on occasion accompanied by the Zodiacal Light. These comets were nice objects for trained observers however for members of the public who didn’t know where to look the comets past unseen and the question always returned, when will we get a real naked eye comet?

I know I’m not speaking for myself when northern hemisphere observers felt cheated and let down when the southern hemisphere got treated to two great comets in the form of C/2006 P1 McNaught and C/20011 W3 Lovejoy, the latter being a sungrazer with long exclamation mark tail while the former was a remarkable comet sporting a huge peacock dust tail which curved across some 30 or more degrees of sky and complimented by a spectacular array of synchronic bands, for many this was the comet of a life time. Although McNaught was seen from the north prior to perihelion it was nothing compared to what it would become two weeks later from the south.

Our patience was rewarded by the discovery of C/2012 S1 ISON in 2013 which promised to be a great comet for the north, due to its fine post-perihelion positioning and forward scattering there was confident speculation of a high contrast naked eye tail at least 40 degrees long which generated much comet fever.  ISON approached the sun and in full view of the world via SOHO imagery it broke apart, the comet was baked by its fiery perihelion approach and rapidly faded as a comet ghost taking our dreams with it.

2020 brought a resurgence in comet interest with several candidates which could put on a fine show. C/2019 Y4 ATLAS was expected to become a great comet for the north however two weeks before perihelion it rapidly faded and broke apart, it was obvious this was a delicate object which had transformed into a rumble pile. I watched, fascinated, night after night during lock down as this elongated patch of haze slowly crept among the stars, although the comet was a let down it was still fascinating to watch while the world’s best CCD imagers captured a train of comet condensations with their own tails within that haze, a scene not dissimilar to D/1993 F2 Shoemaker-Levy 9 in 1994 prior to its spectacular collision with Jupiter.

How could the northern hemisphere have such bad luck with comets?, it seemed that time was running out and some began to seriously wonder if we would ever see a decent comet again. To soften the blow of ATLAS comet C/2020 F8 SWAN was discovered and began to brighten fast with a developing gas tail, if it kept up its current rate of brightening it could be a naked eye object in the north after perihelion, could this be our chance?

The first clear night when SWAN was visible I was ready and waiting, I was expecting a binocular object at the very least. I used my 8” telescope to sweep the region of sky near Auriga and after one hour of constant searching I almost gave up, then I found it. What a disappointment it was, a faint haze barely visible against the background sky, I estimated its magnitude at +8.2 instead of naked eye, I later learned the following day that SWAN had disintegrated.

Nature didn’t want to give up and soon yet another interesting comet was discovered designated C/2020 F3 NEOWISE named after the Near Earth Object Infra Red Wide Field Survey Explorer. This was a spacecraft which scans the skies searching for Earth threatening asteroids and comets, it made many discoveries however its latest would become historic.

NEOWISE was a long period comet on an orbit which would bring it very close to the Sun just inside the orbit of planet Mercury. The comet would round the sun and become visible from the northern hemisphere during July when it might be visible in binoculars. However the damage had already been done and many observers had gave up not wanting to be let down once again, this was an all too familiar story. Sky watchers watched it with passing interest and even comet experts were sceptical with some saying its rate of brightness could not be sustained and the comet had a small nucleus, in other words its future was not great. The comet kept brightening then during late July it passed through SOHO’s LASCO C3 camera where the world could watch its perihelion performance. This was when the excitement surged, NEOWISE was brightening rapidly and had developed a good tail and it not only that it looked completely healthy and intact, the consensus was this  comet was putting on a very good show and there was nothing stopping what looked to be a proper naked eye comet on the way.

A few days after perihelion it was picked up at magnitude +0 from New Mexico then as it receded from the sun it become readily visible for everyone in the north.  During the apparition of NEOWISE I managed to observer and photograph the comet on nine different nights over a two week period including the magic moment for five nights in a row when it was at its best after perihelion and during its closest approach to Earth. In my own opinion this was the best comet since Hale-Bopp twenty three years ago. NEOWISE put on a fine naked eye show as it moved into the northern circumpolar sky sporting a vivid highly condensed (D.C:9) coma and a wonderful dust tail which grew in length from 2 degrees to over 20 degrees or 40 apparent full moon diameters. Photographers from darker sites captured a straight blue type ion tail for 30 degrees; the comet was actually huge in angular extent. 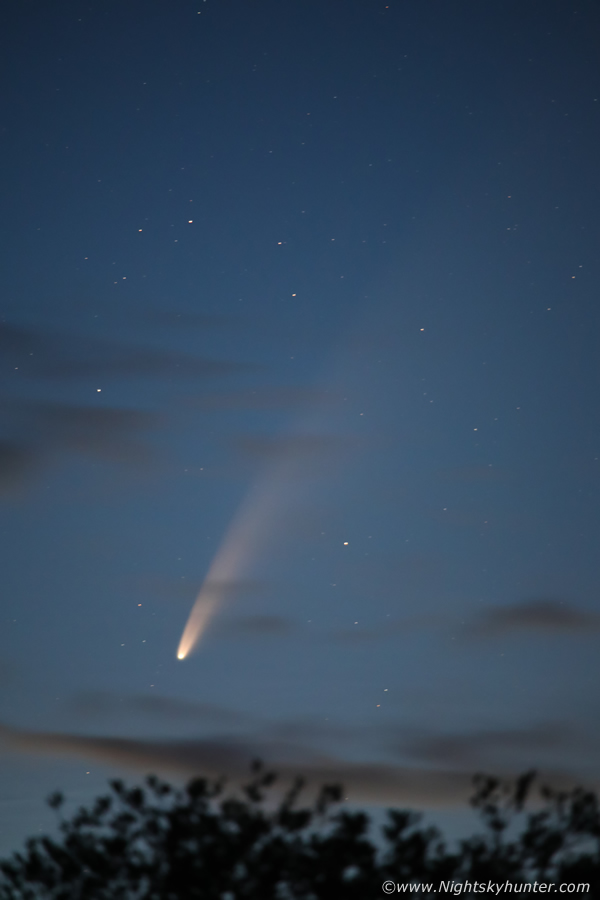 Several nights stand out to me as special; on July 8th I got a lucky break in the clouds and watched in disbelief as the comet hung in the sky embedded within a type 3.5 Noctilucent Cloud display. The comet was visible to the naked eye as a gold sheaf basking in an ocean of silver, blue and even orange-green NLC clouds which could be seen passing over the comet in real time. The view in the 8” was jaw dropping,  the dust tail extended beyond the field, the tail itself was the most well defined I have ever seen with incredibly sharp  edges, the golden tail was split along the middle by a dark division which seemed to glow with a life of its own. The coma was yellow-gold with three large jets and a fountain like a gold umbrella blown back from the force of the invisible solar wind. The visual scene reminded me of renditions of great comet C/1858 L1 Donati I had seen in books, and as I watched, electric blue NLC waves and lacunosus holes drifted over the gold comet, this experience was beyond words.

July 9th/10th was another night which shall always stay with me. I was located outside Cookstown waiting for breaks in the cloud, it seemed hopeless as banks of dark cumulus seemed to linger low in the north all night. I set up the camera and waited, suddenly a break yawned open and there was a gold search light beam visible to the naked eye lancing upward through the pre-dawn stars , the clouds closed in again then opened a few minutes later and I could see that the search light beam was the tail of NEOWISE, its coma had just rose above the tree tops, this moment reminded me of my own first accidental sighting of Hale-Bopp in 1997, it was an emotional moment, comets really can be powerful things.

NEOWISE became one of the most photographed and observed comets in modern times, the images from all over the world were spectacular and even those with humble equipment even managed to capture it too, it was not uncommon to see images taken with mobile phones. For many NEOWISE was their first introduction to comets, families stayed up late to enjoy the new visitor and for some it made a lasting impression, I’m certain this comet was the catalyst for many new amateur astronomers to start in this wonderful hobby and for some it may even be the beginning of a lifelong interest in comets.

Measurements made by the NEOWISE spacecraft indicate the comet had a very active nucleus 5km in diameter which was issuing 10 tonnes of water per second. During late August NEOWISE rapidly faded to the threshold of naked eye visibility has it began to dive south into Canes Venatici where southern hemisphere observers where once again able to pick it up. For many, myself included, NEOWISE was one of the finest astronomical events I have ever witnessed, it won’t be back for another 6,800 years!

Was C/2020 F3 NEOWISE a great comet? This question has generated much debate among comet lovers both new and old and at times the conversation has become rather heated. Many want NEOWISE to be ‘great’ however those comet observers who have been around a lot longer rest assure us that when compared to other comets such as C/2006 P1 McNaught, C/1996 B2 Hyakutake and C/1975 V1 West then NEOWISE was not a great comet, but it came close. Experienced observers fondly refer to NEOWISE has a ‘mini great comet’ or ‘a really good comet’, prolific comet observer and expert Gary Kronk has stated that out of the 170 comets he has observed he ranks NEOWISE as number four on his list, which quite a feather in the celestial cap.

Great comets need to have a large active nucleus and come close to the sun or Earth and must have a favourable viewing geometry. NEOWISE was visible at mag +1.0 to +1.5 after perihelion, it had a large and active dust rich nucleus and it did have a prominent tail, all of these requirements satisfy a ‘great’ candidate, however it was let down by its position in the sky. During the finest moments of the comet’s apparition NEOWISE was always close to the sun, low in the sky and fighting against atmospheric extinction and was bathed in bright twilight. Had NEOWISE been at a more distant elongation from the sun then there would be no question this would have been a great comet. Great or not, nobody can argue with the fact that this comet was a wonderful slight in our skies during a time of great unrest following the Covid-19 pandemic, NEOWISE got people to look up  and see the bigger picture and find peace and tranquillity in the starry night.  I hope we don’t have to wait as long for the next bright visitor, thanks very much for reading.

Visit Martin’s Website at www.nightskyhunter.com for more pictures of Comet Neowise and fantastic articles from many years observing in N.Ireland.

My Early Years In Astronomy by John McConnell FRAS