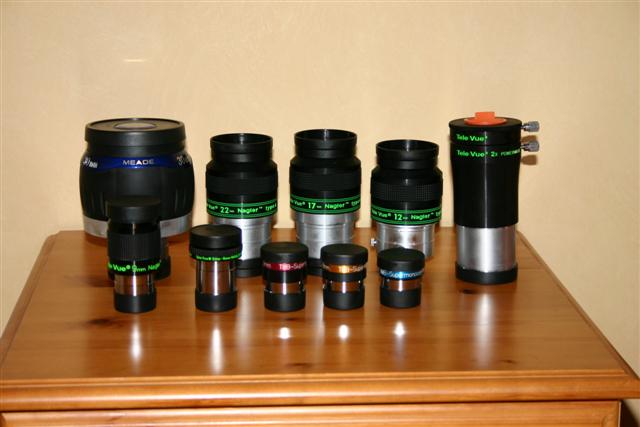 The following is a basic guide to some of the factors to take into consideration when choosing eyepieces. It is based on my experience but also on conversations with and articles by other observers much more qualified then myself.

The choice of which eyepieces to purchase is almost as important as which telescope and mount to choose,

eyepieces couple to our telescopes to give us our observing experiences and a bad choice of eyepieces will limit the experience as much as a bad choice of telescope. The best advice I can give to anyone contemplating a purchase of an eyepiece is to research it, read reviews of it and speak to people using one, go to an observing evening and try it out because an eyepiece will perform differently in each scope. The following is a list of terms used in relation to eyepieces and why they are used in eyepiece evaluation.

Eye Relief
Eye relief is the distance above the eyepiece we place our eye to see the entire field of view of the eyepiece. Eye relief affects our comfort when we observe, if the eye relief is too small our eye is too close to the lens, indeed in some eyepieces the relief is so short that, if we blink, our eyelashes touch the lens. If you are a spectacle wearer and need to observe with the glasses on you will probably need 18mm or more of eye relief, however if you remove your glasses or do not need glasses 8mm is enough eye relief to be comfortable. Too much eye relief can be as frustrating as too little as it makes the ideal placement of your eye difficult and you can feel disconnected from the eyepiece, extended eye cups can remove this problem.

Apparent Field Of View (AFOV)
The apparent field of view is the field of view advertised by eyepiece suppliers. It’s the angle your eye sweeps out when you look at one edge of the field in the eyepiece and then look to the opposite edge. The greater the AFOV the more of the sky you will see, many of todays most highly regarded eyepieces are ones with a large AFOV, this is because it gives a more emersive feeling to the observer. With a larger field of view it also enables higher magnification to be used and still encompas quite large objects, the picture belows show two views at the same magnification, the one on the left has a 50° AFOV the one on the right an 80° AFOV, as can be clearly seen the the one on the right frames the subject better. 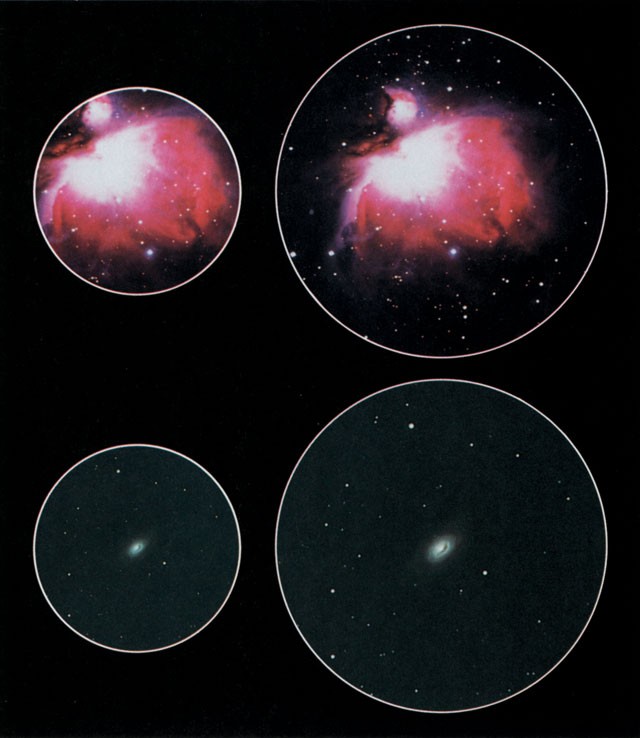 However, the main problem associated with getting a wide AFOV is the cost. To get a wide field of view, that is well corrected, requires numerous lenses to be incorporated in the eyepiece. Every additional lens impacts light transmission, so to limit the impact of these lenses they must be of top quality and well coated and this raises the cost. Many of today’s best wide field eyepieces are prohibitively expensive for the average amateur astronomer. Eyepieces can be roughly divided into four categories around AFOV: –

Narrow Field 30°-45° (some specialist eyepieces appear in this category, notably some specifically designed for planetary observation where a large field of view is not necessary but maximum transmission is)

Normal Field 50°-60° (there are many good quality, fairly inexpensive eyepieces with this AFOV)

Low Power – up to 10X per inch of aperture

Extreme Power – 50 – 75X inch of aperture, this range of power is rarely used as atmospheric conditions and eye problems will overwhelm the view, to use this power needs nights of excellent seeing.

Exit pupil is a factor in choosing eyepieces because of the limitations of the Human eye, at best the human eye dilates to 7mm so an exit pupil greater than 7mm means you are not seeing the whole image i.e. you are not utilising the full aperture of the telescope. If you are using a refractor this is the only reason not to use an exit pupil greater than 7mm, however, if you use a reflector there is another reason not to use a larger exit pupil than 7mm. All reflectors have a secondary mirror which forms a shadow on the primary mirror, we usually talk about this central obstruction as a percentage of aperture and the obstruction is always in the centre of the image, normally this is not noticeable but if the exit pupil is increased so is the effect of the central obstruction until it can become apparent as a black spot in the centre of the image. To find the longest focal length eyepiece to use multiply your focal ratio by 7 and this will give you the eyepiece focal length which will produce a 7mm exit pupil. The minimum exit pupil will be decided by our eye, for even the best sighted person an exit pupil of less than 0.5mm will reveal defects in the eye such as ‘floaters’.

Eyepieces IssuesWhen choosing eyepieces it is also important to be able to understand what issues may be prevalent in the eyepiece design. If you are researching which eyepieces to purchase you will sometimes read about defects or aberrations in a certain eyepiece, often the reviewer will state what problem they found e.g. “there is rectilinear distortion present”, this is only useful if you know what rectilinear distortion is and how it effects the view through an eyepiece. The following is a list of the more common defects/aberrations that effect eyepieces and a short explanation of what might be seen through the eyepiece if they are present.

As this is mentioned above I will start with it. When there is rectilinear distortion present reviewers quite often write of the ‘fishbowl effect’, the picture below illustrates the issue.

An angular magnification distortion is where the degree of magnification differs slightly from the centre of the eyepiece to the edge. The impact of this on most observers if negligible, indeed most observers will never know if it exists in an eyepiece. The only real impact is if an observer is carrying out star drift timings, i.e. timing a star moving across the field of view in an undriven scope, then the timings will be slightly off as the speed with which the star moves across is not constant (it will move faster across the centre than at the edges).

Spherical Aberration of the Exit Pupil

A spherical aberration of the exit pupil is caused by different bits of the exit pupil having different best focus points. This is often referred to kidney-beaning in reviews. This is a particular annoying defect in an eyepiece as it results in a black spot or kidney bean floating around the view depending on where you place your eye and it will be very difficult to view the entire field of view.

Vignetting is caused when a lens of an eyepiece is not able to field all the lights rays coming through the previous lens. Vignetting presents itself as a noticeable darkening of the field of view towards the edges.

Chromatic aberration is caused because no lens no matter how well configured or made can focus all colours of light at exactly same point. It is not that common for an eyepiece to be severely effect by CA but if an eyepiece suffers from CA it will be noticed, usually, at the edge of the field of view where a bright star, planet or the moon would have a false colour fringe.

There are other terms often used in reviews to describe flaws in eyepieces but in most cases the effects of these are self explanatory e.g. light loss, light scattering, ghost images.

Choosing the correct eyepiece or selection of eyepieces is very important to maximising your observing experiences, when contemplating an eyepiece it is very important to consider the above factors. Getting informed about any potential eyepiece purchase will protect against the disappointment of spending good money on something that is unsuitable to your requirements, in this I definitely speak from bitter experience. Reading reviews, speaking to fellow observers and trying out various eyepieces will enable you to make good choices for your eyepieces.