Armagh Observatory, 5th May 2006: A comet, currently breaking apart, is visible in our eastern evening sky in the constellation of Lyra. Comet Schwassmann-Wachmann 3 (SW3) has broken into at least sixty pieces. Named alphabetically, one of the fragments, C, is just bright enough to be seen with the unaided eye, and fragment B with 50mm binoculars, while the others require telescopes of varying sizes to be seen.

This periodic comet was discovered on 2nd May, 1930 by the German asteroid hunters Fredrich Karl Arnold Schwassmann (1870 — 1964) and Arno Arthur Wachmann (1902 — 1990). About one month after its discovery the comet reached its closest point to the Earth (5.73 million miles). The comet was last seen that year on 24th August but not before its period of revolution around the Sun had been determined at just under 5.5 years.

Subsequent searches every 5 – 6 years failed to find the comet until it was spotted on a photograph taken at the Perth Observatory, Australia in August 1979, about one month late according to the predicted time.

The comet was not found at its next return in 1985, however it was recovered again in 1990. In April that year, SW3 came within about 34 million miles of the Earth and reached magnitude 9, bright enough to be seen with the aid of a small telescope.

The special interest in SW3, however, is that at its next return in 1995, it brightened significantly on three occasions, splitting into between three and five apparent nuclei. At its last appearance in 2001, three of the condensations were still evident. At its current apparition, the comet has split further into about sixty pieces, and some of the fragments are themselves breaking apart; the comet is literally disintegrating before our eyes.

Current calculations indicate that the main component of the comet, designated SW3C, may reach maximum brightness around May 15th when its distance from the Sun and Earth will be about 93 million miles and 7.5 million miles, respectively. The accompanying finding chart shows the comet’s path until May 16th. 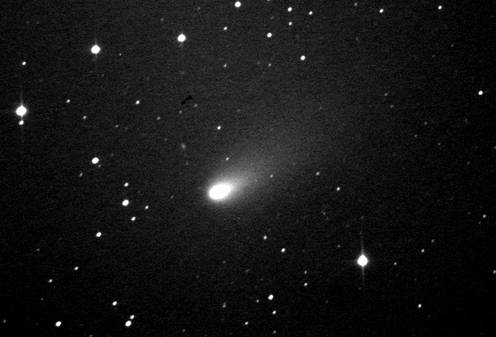 The ‘C’ component of Comet Schwassmann-Wachmann 3 imaged by Apostolos Christou of Armagh Observatory on 4th April, 2006. 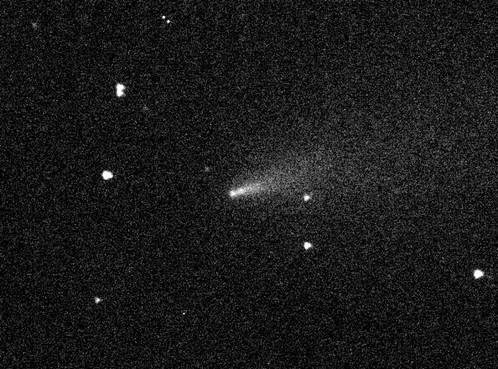 Fragment ‘B’ imaged by Apostolos Christou and John McFarland on 21st April, 2006, showing the splitting of this component.

The path of the ‘C’ fragment of Comet Schwassmann-Wachmann from 6th to 16th May 2006.

Why observe comets? by Martin McKenna