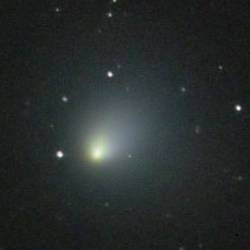 Following a communication from our Chairman, the EAAS are delighted to have received an article from world renowned comet expert Dr Donald K Yeomans.

It’s white knuckle time at NASA’s Jet Propulsion Laboratory. That’s because on the Fourth of July, a small copper-laden spacecraft is going to be intentionally run over by a comet. That’s if all goes well. The mission is appropriately called Deep Impact.

Scientists and engineers are working long hours to squeeze the necessary tests, checks, and course corrections into the diminishing time before our hurtling spacecraft collides with comet Tempel 1 at 5:52 UTC on the morning of July 4. The impacting spacecraft, and the cometary crater it will create, will be observed by a second nearby Deep Impact flyby spacecraft, three spacecraft near Earth (including Hubble) and a small army of professional and amateur astronomers on Earth.

“The comet’s nucleus, its heart, is thought to be a jet-black, pickle-shaped, icy dirtball some 14 kilometers in its longest dimension. Comets like this one are the left over bits and pieces from the solar system formation process that began 4600 million years ago. They have spent most of their lifetimes in the deep freeze of the outer solar system and still retain the chemical mix from which the planets formed. Studying them is the key to understanding our solar systems’ beginnings. Much of the Earth’s water and carbon-based molecules, the necessary building blocks of life, were delivered to the early Earth via cometary collisions and once life did begin about 3500 million years ago, the evolutionary process was punctuated with collisions of large comets and asteroids, allowing only the most adaptable species to evolve further. We are all made of cometary materials and we humans may owe our preeminent position atop the world’s food chain to a comet that struck the Earth 65 million years ago and took out the mammals’ principal competition – the dinosaurs that were then the dominant species. To avoid the fate of the dinosaurs, we’ll need to understand the compositions and structures of comets in the unlikely event that we find another one on an Earth threatening trajectory.”

Weighing in at 365 kilograms and with a relative velocity of 10 kilometers per second, the impacting spacecraft must autonomously observe, track, compute course corrections and maneuver to effect a collision that may blast a crater in the comet the size of a football stadium. Or the icy comet may simple swallow our spacecraft without much of a crater or ejecta. There is nothing subtle about this mission and its truly exciting aspect is that we do not know exactly what to expect. But no matter what happens, we’ll have a much better understanding of the heart of a comet by observing the impact crater develop. What is it made of and how is it put together? 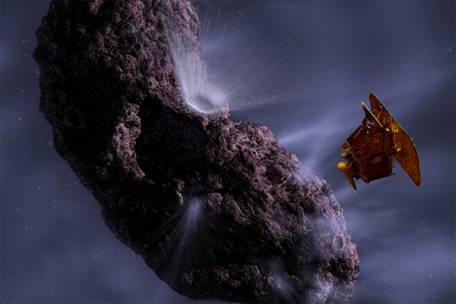 Is it a solid dirty ice ball that would produce a smallish crater that develops quickly? Is it a fragile rubble pile of icy dirtballs held together by little more that their own self gravity that would produce a large crater that develops slowly over a few minutes, or is it so porous that the spacecraft will bore into it with little in the way of any crater or ejecta?

Like a field geologist who uses a hammer to investigate the strength and density of an unusual rock formation, we’ll be delivering a blow to a comet that is puny compared with the impacts that Mother Nature routinely inflicts on our solar system. Ours will be the celestial equivalent of a bug colliding with a speeding truck. Another reason why it’s white knuckle time is that this mission involves not one, but two spacecraft. While one spacecraft is being demolished by the comet, a second spacecraft will be capturing what we hope to be spectacular images of the collision. Because it will take seven and one half minutes to send a signal to the spacecraft, both spacecraft must see, think and maneuver by themselves in a very hostile environment with no help from a small group of anxious Earth-based scientists and engineers. These complex and smart spacecraft are our intrepid travellers, extensions of ourselves and a fine example of the type of gutsy exploration that is right on the boundary between the possible and not. Yes, we humans may be made of cemetery stuff but this instinct to explore, and to push the limits of what is possible, is part of what makes us truly human. 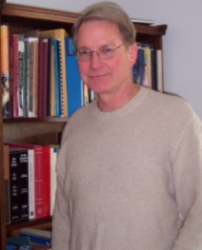 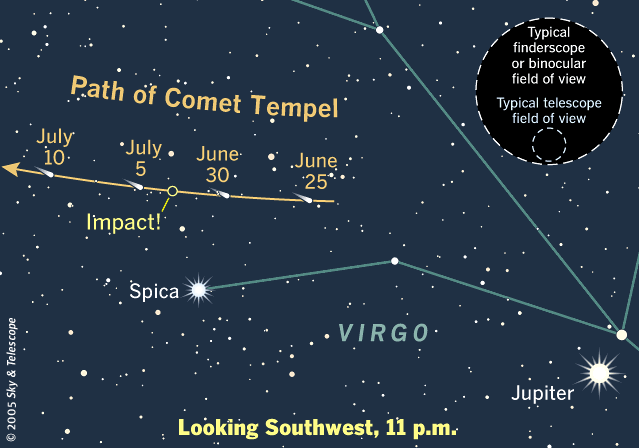 Dr. Yeomans is a senior research scientist, supervisor for the Solar System Dynamics Group, and manager of NASA’s Near-Earth Object Program Office. He was the Radio Science Team Chief for the Near-Earth Asteroid Rendezvous (NEAR) mission. His research work is focused upon the physical and dynamical modelling of comets and asteroids. For the Deep Impact mission, he will be responsible for optimizing the ephemeris of comet Tempel 1 and helping to develop the targeting strategy.