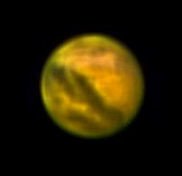 The opposition of Mars in October 2020 will be the best for several years, and this is a great opportunity to see the planet. It is currently in the constellation of Pisces. Mars is a difficult object to observe most of the time, as it is quite small and relatively featureless compared to the gas giants like Jupiter and Saturn. It only appears in the night sky roughly every other year, It will not be as readily visible again until the mid-2030’s

The planet has been steadily growing brighter in the sky over recent months and becoming visible earlier in the night. It is easily seen in the East as a distinctly red-coloured naked eye object, and even modest telescopes have been capable of showing the polar cap and some other features for the last couple of months. The southern hemisphere of the planet is tilted towards the Sun at present, and, in recent days, the southern polar cap appears to be shrinking in the relative warmth of the southern summer.

Although opposition (when the Sun, Earth and Mars are in a direct line) occurs on the 13th October, the closest approach to Earth will be on 6th October, when the two planets will be approximately 38.6m miles (62m kilometres) apart. The planet will appear slightly smaller in a telescope than at the 2018 opposition (when Mars and Earth were approximately 35m miles apart), but it will be much higher in the sky than in 2018, when it was quite close to the horizon, spoiling the view for UK observers.

Mars will continue to be a bright object in the night sky for the next few months, becoming visible earlier and earlier in the evening, although it will become fainter and smaller as time goes on.

Therefore, try and take this opportunity to see the planet near its best. An excellent article by Pete Lawrence for Sky at Night magazine, giving details of features to look out for, can be found here