Robert Cobain from Bangor runs an automatic meteor observing station from his house and has kindly taken the time to tell us of his observations and his setup. This is truly a fantastic way to record meteor showers and to capture bright meteors even when there is partial cloud cover. Robert has also setup a website, MeteorLogNI which automatically displays his observations each evening and these observations are used by the Armagh Observatory which also has an observing station for distance and altitude estimates of meteors.

EQUIPMENT
The equipment used can be put together relatively cheaply. Basically you need a high sensitive security camera such as the Watec 902h (dm2s also) or 120n. You don’t need one of these Mintrons that have lots of video frame integration built in as this is pointless for meteors. Then you need to get a very fast wide angle lens, such as the Computar 6mm f0.8(!) or the 2.5mm f1 (I think). With this setup you can reach Mag 4-5 in a 1/50 of a second, which is nice and comparable to an image intensifier. Image intensifiers are almost useless anyway because they don’t last very long, cost the earth, and have low resolution. 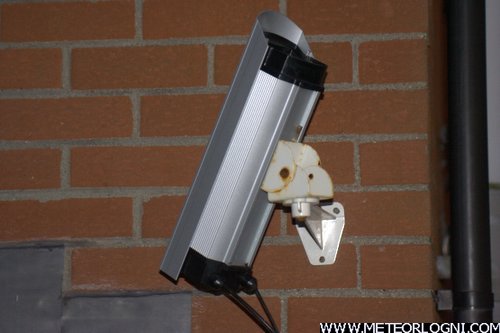 Then you need a waterproof security camera housing so that you can monitor the sky constantly. This is part of the trick because meteors are quite rare and it is essential to monitor every night. The next crucial component is the software and computer capture hardware. The software I use is called UFOCapture and it is Japanese although the interface in English. This software will only capture video if something is bright and moving. Without the software you would have to capture the entire night of video and trawl through it all manually also you would need a very large hard disk.

When considering a camera make sure it has a 1/2 inch or greater sensor in order to get the best image quality. I would recommend the Watec as they have the best build and image quality and have been well tested. You can find comparisons on the web and the Watec always beats Mintron for example. Also note that on that web page the 120N appears to have a very low Lux rating but that is the lux after 256 frames of integration. The 902h is the most sensitive but the 902dm2s (which I have) has DSP to cancel out hot pixels and is only slightly less sensitive.

As for lenses, the computar lenses are the only ones which are easily available and the 6mm f0.8 has been found to be (by the Japanese users) the most useful lens. The 2.5mm f1 computar is also good and will capture almost as many meteors. Longer focal lengths like 25mm will also work, and will make small meteors seem huge but properly large meteors will leave the FOV very quickly.

CAPTURES
There is nothing like capturing your first meteor on video! And with two there is even more fun because of the possibility of calculating orbital elements! Also fun is being outside and seeing a meteor with the naked eye knowing that the camera will have captured it!! I suppose this system makes rare objects such as meteors and sprites etc slightly less precious because of the relative ease in seeing them, but I don’t think that sentiment is going to stop any of you!

I have also got plenty of video of the ISS and Iridium flares, flashing satellites, and the NOSS doublet! Armagh have some good video of fork lightning. Also bats, moths, sometimes rain, night flying birds, loads of planes, cosmic ray hits, no UFOs though.

If you look at the website above, you will see some amazing video of meteors brighter than the one below and also rare objects such as sprites and blue jets. I have only ever captured one sprite with this system because to capture sprites you need to orient the camera towards the horizon, whereas my camera is pointing up in order to triangulate with the Armagh Observatory who have a similar system. At last count we had over 60 simultaneous meteor observations. If anyone needs any help to get\use the software and hardware don’t hesitate to contact me via the EAAS Forum.

VIDEO CAPTURE CARDS
I have tried three different capture cards, a Kworld DVDmaker, a Geforce 6600GT VIVO and the best quality was from the Canopus ADVC 55 which I am presently using. The only thing about it is that its a bit dark, but some video processing sorts it out. If you do get a capture card make sure you keep the receipt in case it doesn’t work or the quality is bad. Another thing to watch out for is you need to have reasonably quick hard drive with plenty of free space. For a while I was using a 160GB external Firewire hard drive by Freecom which worked well. And for capturing at the full 720×568 resolution you also need a quick PC like at least 2.5 GHZ

I ordered the video camera housing and cables from Maplins. The Watec camera takes a BNC video connection so you need to order a big length of video cable and some screw on BNC connectors (or crimped on). Then you need a BNC to composite adapter so the cable can be connected to video capture hardware. You also need to get the appropriate power supply for the watec camera and most likely an extension to this power supply cable. Also useful is a timer switch on the plug so that the camera only turns on at night, since you wouldn’t want the sun shining into such a sensitive camera by accident! A good feature of the computar lens is that the Iris is closed when the power is off.

ANALYSING THE RESULTS
Once the meteors have been captured they are analysed using another piece of software from the same author called UFOAnalyzer which, after being configured, will trace the meteor path backwards to see if it corresponds to any known radiant. Only radiants which are known to be active at that time of year will be considered. Different radiants have different allowed margins of error in the displacement from the centre of the radiant. When a meteor has been determined to have come from a particular radiant, an approximate calculation is made by the software which uses certain assumptions in order to give an approximate speed and height. Only if the meteor is thought to have come from a particular radiant will the calculations work. Even then they are very approximate. For instance the speed calculations for the Leonids were too high , 70+ km/s . According to Tolis Christou at Armagh Observatory, objects within the solar system cannot exceed 72 km/s , although interstellar meteors are predicted to exist!

Also important to note is that the magnitude estimates are quite approximate due to the fact that the video signal only has 255 levels of brightness. Earlier data on the meteorlogni website was underestimating the brightness of meteors but now the estimates are better. Very bright meteors also tend to get overestimated.

After the meteors are analysed, the data is output into a CSV file and copied to a backup folder. In order to get this data onto the website I wrote an application to do it automatically. All I do is right click on the folder for the evenings captures and the code will copy the CSV file to a SQL database, compresses the videos using VirtualDub and Windows VCM codec, and images using imagemagick and uploads the lot. Also the monthly log page is updated and a daily log page is created, and the top 10 brightest page is updated hopefully!! The meteor log pages are all actually XML files which are translated on the server into HTML.

I tried many forms of compression before I settled on the Windows VCM codec, including Xvid. The main reasons for using this codec is because, one, It supports AVI format and therefore VirtualDub and two it had the best combination of file size and quality. File sizes are impressively small, which makes my website more practical. The number1 brightest meteor so far is only 560KB in size which is phenomenal and I could not achieve this with any other compression codec. Crucial to get the compression so high is the use of the Temporal Smoother filter within VirtualDub. This effectively reduces noise and therefore allows the compression to work better.

The XML format is very handy for producing web pages because you can write an XSL translation file. I put the CSV file into SQL using DTS (Data Transaction Services) then query SQL to return the meteor data as XML. The XSL translation file means I can change the structure of the website very easily, also the use of CSS means changing the look is very easy. The XML files contain much more data than is actually displayed so I could in the future use this info for something, perhaps overlaying star maps.

Regarding the website, note that the calendar includes links to the Heavens above website (AM PM links IR for Iridium flare predictions). The cross symbol links to the UFOCapture generated report for that night.

Anyway I think this article is long enough! Here is a video of the brightest Geminid that I captured this year. If you look closely at the video there are actually 2 Geminids! The peak was unfortunately clouded out here in Bangor so there were not as many meteors as expected.