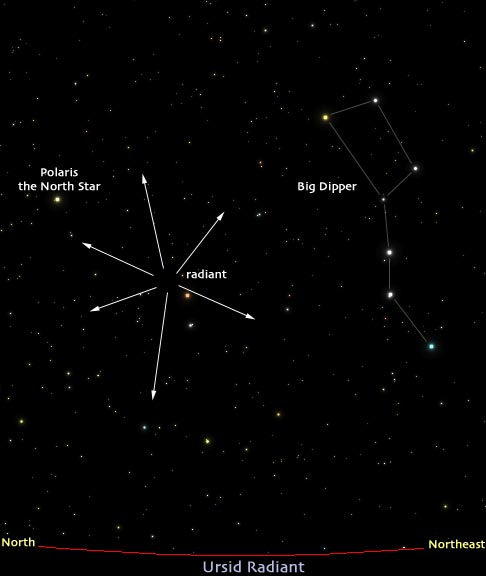 The Ursids meteor activity begins annually around 17th December and runs for for just over a week, until the 25th or 26th, with a peak on 22nd December. This meteor shower is named for its radiant point which is located near the star Beta Ursae Minoris (Kochab) in the constellation Ursa Minor.

The Ursids were probably discovered by William F. Denning who observed them for several years around the turn of the 20th century. While there were sporadic observations afterwards, the first coordinated studies of the shower didn’t begin until Dr. A. Becvar in 1945. Further observations in the 1970s and ongoing to current have established a relationship with the Comet 8P/Tuttle. In its 13.6-year orbit around the Sun, Comet 8P/Tuttle never ventures inside Earths orbit.

Most of the Ursid meteors are faint therefore it is important to observe from rural areas away from city lights. Since the radiant lies in the northern half of the sky it would be best to face this general direction to see the most activity. There is no need to stare directly at the radiant, rather it is advised simply to place the radiant somewhere within your field of view so that it will be easy to trace the meteors back to Kochab (Ursids) and those that don’t (non-Ursids or sporadics).

Earlier observations described an average radiant of RA=217 deg, DEC=+76 deg, with maximum occurring at a solar longitude of 270.66 deg (about December 22), with the duration being established as December 17-24. The Ursids have a particularly narrow stream, prompting veteran meteor observer, Norman W. McLeod, III (Florida) to comment that the Ursids “must be a compact stream like the Quadrantids. You have to be within 12 hours of maximum to see much.”