Venus is the second brightest object in the night sky (second only to the Moon) and our nearest planetary neighbour, being the 2nd planet from the Sun. Venus is almost the same size as Earth, and has a rocky surface with a metal core. Clouds of sulphuric acid coat Venus. An extremely thick carbon dioxide atmosphere blocks almost all sunlight. The surface pressure is extreme, equal to the pressure 3000 feet below the ocean’s surface. The greenhouse effect makes Venus much hotter than Earth, with a surface temperature of 860 K. Because Venus is closer to the Sun than Earth, we sometimes see rare solar transits when the planet passes directly in front of the Sun from our vantage point. 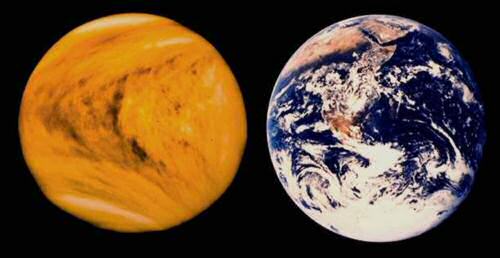 One of the interesting things about Venus is that it rotates in the opposite direction of most of the other planets in our solar system! Looking above Venus, you would see it rotating clockwise on its axis. Most other planets rotate anti-clockwise (except Uranus and Pluto which rotate from North to South). Venus is said to rotate in a retrograde fashion. On Venus, the sun rises in the west and sets in the east. One day on Venus lasts for 243 Earth days and one year lasts 225 Earth days.

Massive lava flows caused by an outbreak of volcanic activity apparently coated the surface of Venus about 500 years ago. Venus has several hundred thousand volcanoes, more than any other planet. Some of these may still be active, but no recent volcanic activity has been detected. The images below were taken by EAAS members, Mark Stronge and James Adamson where you can see the waning phase of Venus. 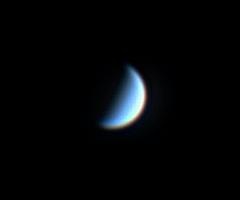 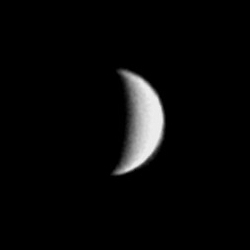 Venus was first visited in 1962 by Mariner 2, which flew by the planet.  After many failed probes, the Russian spacecraft Venera 7 reached Venus in 1970, the first spacecraft to land on the surface of another planet. The most successful Venus mission was Magellan, which orbited Venus from 1990 to 1994, mapping 98% of Venus’s surface using radar. Observing Venus The thick clouds that hide the surface of Venus make the planet very efficient at reflecting sunlight and account for much of its brightness. The other reason that Venus is so bright is that it is the closest planet to Earth. Venus is easiest to locate when it is visible in the sky just after sunset (at eastern elongation) or before sunrise (at western elongation). It simply outshines everything else in the sky. Some ancient cultures thought that Venus was two different objects: an evening star and a morning star.

Venus was named after the Roman goddess of love and beauty. The equivalent goddess in Greek mythology is Aphrodite. Venus is the only one of the planets in our solar system that is named for a goddess instead of a god, and almost all of the features we have discovered in our exploration of this planet have been named for either historical or mythological women. 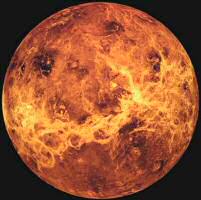 Choosing a telescope By Andrew Johnston