Unlike its sister disciplines within astrophysics and planetary science, meteor astronomy has traditionally been the domain of the visual observer. Large databases of visual meteor observations, meticulously calibrated and compiled via the “Mk I eyeball” detector, have formed the basis of scientific studies of meteor storms, variation of meteor showers from year to year, sporadic meteor statistics and so on. Ultimately however, camera technology would have the last word.

Cameras, unlike humans, do not tire, feel hot or cold or feel an overcast night’s disappointment. They operate on a 24/7 basis collecting permanent records of meteors which, unlike visual meteor records, can be verified by third parties and analysed by a variety of methods. 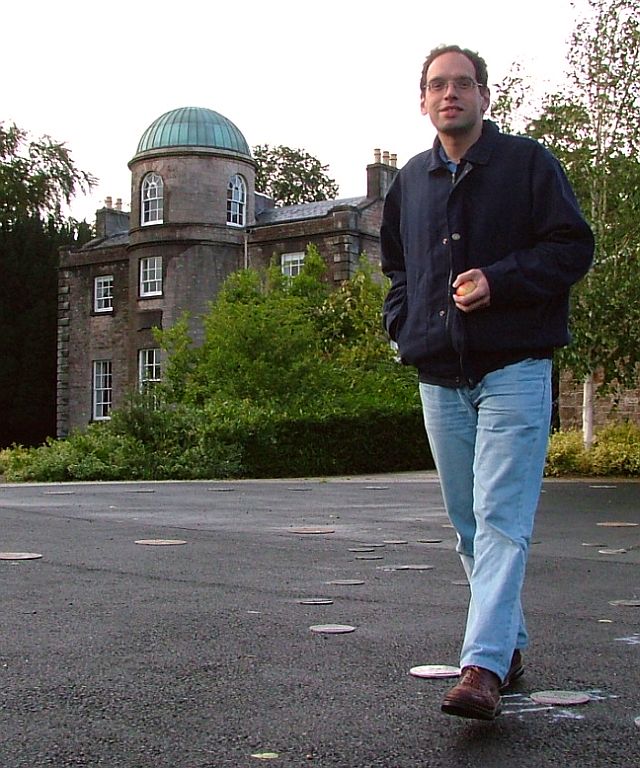 The recent advent of cheap, light-sensitive CCD video cameras as opposed to previously-available yet hugely expensive and bulky image intensifiers means that building and operating a research-grade meteor observing station is now well within the budget of the enthusiastic amateur. Meteor astronomy has indeed entered a new era.

CAM1 is intentionally identical to a camera operated by Robert Cobain in Bangor, Co Antrim, who pioneered video meteor observing in Ireland. These two identical cameras make up a double meteor station. In other words, they point at the same volume of atmosphere at a height of about 90 km, where most meteors reach their maximum brightness, to capture the same meteors simultaneously. This provides unique data on the 3D position and velocity of the meteor, making it possible to reconstruct, with great precision, the meteoroids (i.e. the extraterrestrial particle that created the meteor) orbit around the Sun. 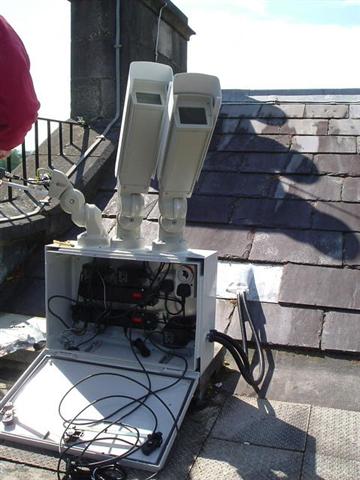 CAMs 2 and 3 are intended to cover as much area on the sky as possible to detect those rarer brighter meteors or even fireballs. Although showers contain many bright meteors, most of the larger fireball-producing meteoroids are sporadic, coming from random directions in space. High-time resolution fireball light curves in particular can be used to investigate the structural strength of these larger meteoroids. For example, weak “rubble piles” will appear to flash frequently along the meteor’s trajectory whereas strong, rocky or metal-rich bodies would brighten and dim gradually. The sporadic nature of fireballs is something that will also come under investigation once observations from several years are collected. Are fireballs more frequent on certain months of the year? Stay tuned and find out.

To wrap up the description of the hardware, security-camera-style housings are used to protect the cameras from the elements while the video output from each camera is fed via a USB interface to a medium-spec PC where time synchronising and meteor capturing software is operating.

Being able to time-stamp your video to an accuracy of under a second is crucial and here’s one reason why: imagine that you find yourself in a Leonid-type meteor storm where meteors arrive at rates of several per minute. If you are operating a double or multiple station system, poor time precision would make it very difficult to say which meteor is which and thus degrade the scientific value of the observations. At the Observatory, we use the AtomTime Pro utility, which synchronises the PC clock with atomic time every few hours. Typically, this achieves precision of ½ sec or less.

The meteor-capturing software is the lynchpin of the entire system. It requires an algorithm clever enough to operate unattended for at least one whole night and being able to capture the minimum number of video frames required for the science i.e. those containing meteors and very little else, otherwise the PC hard disk can fill up in a matter of hours and disable the entire system. At the 0bservatory and Robert Cobain’s Bangor station we use the Japanese-made UFOCapture package. This is a flexible piece of software where the detection parameters can be adjusted to suit, for example, a particular night’s observing conditions. It is also compatible with a standard Windows environment (XP Pro for example) and a wide range of graphics cards.

On the whole, the system has fared quite well over its first months of operations. On average, one or two sporadic or minor shower meteors were captured for every hour of clear sky conditions. This translates into roughly one hundred video meteor records per month, a quarter to a third of which are double station events. A single night’s “harvest” will also include several detections of birds, bats, airplanes, satellites etc but never in such numbers as to create anything more than a minor nuisance. This is also true for electrical interference from nearby power sources or equipment.

Although weather conditions during the Perseids peak in August and the Geminids peak in December were not favourable, more than 50 shower meteors in each case were captured on adjacent nights. Most recently, clear conditions on the 3rd of January resulted in the capture of 35 Quadrantid meteors during the predicted peak in the early evening hours despite the extremely low altitude of the radiant.

Fireballs brighter than -5 to -6 seem to occur at a frequency of about one per month (so far).
The cameras have captured a number of very brief “flashes”. These appear on only two or even a single video frame meaning that they are shorter than 1/10 sec in duration. These are probably due to sunlight glinting off Earth-orbiting space debris. Although not of scientific value in themselves, they open the way for a different type of meteor investigation as we discuss below.
During average (i.e. sporadic) activity, CAM 1 captures about as many meteors as CAMs 2 and 3 put together despite its smaller field-of-view (approx. 52×35 deg as opposed to 90×55 for the other two cameras). This is due to the medium angle optics of that camera being sensitive to fainter meteors, counteracting the handicap of a smaller FOV. Roughly speaking, CAM 1 is sensitive down to meteor magnitude between +2.5 and +2 compared to +1.5 for CAMs 2 and 3. Note that the faintest stars recorded on a single frame are mag ~4.
Stellar magnitude is not the same as meteor magnitude since meteors are moving light sources and may not stay on the same pixel for the duration of the exposure; this is also dependent on speed with faster meteors appearing fainter than slower meteors of the same “point-source” brightness.
Some advice for those thinking of setting up their own meteor stations:

Before everything else, think about what you want to do with your station.
If you would like to be part of a multi-station network measuring the speeds and trajectories of meteors over Ireland you need (a) to standardise your equipment to match that operated by other observers (b) to make your site coordinates known to the rest of the network and (c) point your camera to a specific point in the sky, for example, to fill a “gap” in coverage.
To put the emphasis on detecting bright (and possibly meteorite-producing) fireballs you also need (a) wide area coverage meaning as many or as wide FOV (i.e. short focal length) cameras as possible (b) pointing these near the horizon rather than high up to cover the maximum atmospheric area possible.

In all cases, it is important to :

Try to join an observing network rather than work in isolation. Your observations will be far more valuable if they are part of a well-organised and co-ordinated effort aiming to address specific scientific issues.
Map and avoid the light polluted regions of sky over your site especially near the horizon.
Avoid the predicted path of the moon (roughly speaking the south direction).
Think about what you can afford. Most people own a laptop or PC these days so the main cost driver will tend to be the number of cameras and their associated overheads such as weatherproof housings etc.
Think about how to fit this into your daily schedule.
Observing of this type requires a minimum daily time commitment to log all meteors observed during the previous night along with an hour-to-hour record of sky conditions for calibration purposes.
Here are also a couple of projects for those yearning to do something different with their meteor cameras:

1.  Telescopic meteors. One wouldn’t normally think of employing a telescope in meteor searches. However, some streams are characterised by a very steep particle size distribution, in other words a larger than average proportion of small over large particles. When these encounter the Earth’s atmosphere at low speeds, they generate a preponderance of faint meteors best detected by instruments with small field of view and faint limiting magnitude.
A network of two or more cameras equipped with telephoto lenses or short-focus refractors would help, for example, confirm reports in the literature about outbursts of “radio” meteors, i.e. meteors that are too faint to detect by conventional optical means, detectable mainly by their trails reflecting radio waves.

2.  Lunar meteors. At the other end of the size scale, large (kg-mass) meteoroids are too rare to enter the few tens of thousands of square km of atmospheric surface area offered to a visual meteor observer in measurable rates. Enter the Moon. The lunar surface offers a thousand times more surface area on average to an oncoming meteor stream or the sporadic flux. No appreciable atmosphere exists to ablate meteoroids and reveal them as meteors. Instead, the meteoroids directly impact the surface creating bright (<+8m), short-lived (a few ms long) flashes. Following several years of unsuccessful attempts to record such impact flashes, small CCD-equipped instruments detected a few tens of flashes during the 1999 and 2001 Leonid meteor storms.

More recently, single events were recorded during the 2004 Perseids and 2005 Taurids respectively. These first few observations herald an emerging new field where video-camera equipped telescopes no more than 8” in aperture capable of observing the Moon could make a decisive contribution. A simple project would be to monitor the dark side of the moon well before, and well after, full phase to establish the sporadic rate of impact flashes and also the abundance of known meteor showers to such large meteoroids. One could also employ filters, such as the Johnson-Cousins UBVRI set to derive light curves for bright events lasting at least several 1/10s of a second.

The UFOCapture/AtomTime Pro combination mentioned above in the context of atmospheric meteor observations has demonstrated its capability to detect single-frame (shorter than 1/30s) events and would seem suitable for this purpose. In any case, it is important that these observations are carried out simultaneously from two or more cameras separated by at least 20km to eliminate the possibility of false detections due to cosmic ray strikes and low-Earth-orbiting or geostationary satellites.

For more information on issues raised in this article and how you can set up your own station contact Apostolos (or Tolis) Christou or Robert Cobain from Meteor Log NI, Bangor.

Setting up a meteor observing station by Robert Cobain