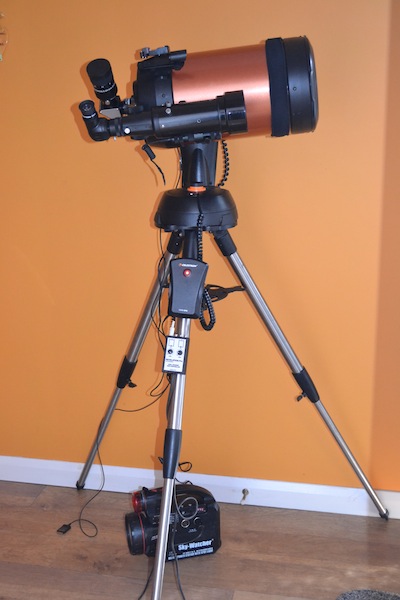 I bought this telescope second hand mid 2012. It was totally standard except for the Hyperion 18-24 mm zoom lens and the Dielectric 90° mirror. (I believe the previous owner dropped the original.)
Firstly, the Hyperion. Truthfully, it’s the only lens I think I will ever need. I have a half dozen other lenses and I’ve popped them on now and again but nothing improves the view from the Hyperion.

This is a very easy telescope to assemble and set up. Going on advice from the seller I used the two star auto-align method. I entered my co-ordinates, date and time and my scope aligned perfectly. Here’s where my problems started. My telescope is just not that accurate.( I say my telescope because most other reviews I have read rave about the accuracy.) After alignment I always go to M31 which is the easiest thing to see but my telescope never hits it. A bit of roaming around and I can get it fairly quickly but isn’t the point of a goto telescope to go to an object?

Ok, so I can find planets easily and M31 but because so many deep space objects are very faint I would often spend a long time trying to find them. It would be fair to say that sometimes the telescope was fairly close and sometimes it was quite a bit away. Still, it didn’t make goto easy.

After spending many nights trying to improve accuracy I concluded that I was in the small percentage of people who had a telescope which was not that accurate. So, how do I solve this problem then? I knew I needed to increase my field of view so I fitted a Celestron travel scope to the side and because this is a fairly low powered scope the field of view is probably 4 or 5 times that of the NexStar. Now I simply align my scope, goto my object, centre it in my travel scope and there it is in my main scope. This remains simply the best thing I have ever done to my NexStar.

As a side note the optics of the Celestron travel scope are superb. Ok, so the magnification isn’t great I have seen the fuzziness of M1 through this little scope.
As soon as I had sorted the goto out I began to enjoy the Celestron NexStar. The views are simply superb from this telescope. Nothing much more to say than that. Globular clusters are “wow” objects and Jupiter and Saturn are both tremendous. I have seen many DSOs with this telescope and I never cease to be amazed with the views.

I observe quite often from my back garden in the middle of Portrush and I am still amazed by the views I get.
Collimation is very easy and I’ve only had to do that once.
There was also a GPS locator with the scope which means you don’t have to enter coordinates. I still do though!

I have made a few improvements to the scope.
As well as the travel scope I put a green laser pointer on the side for two reasons. Firstly, when I find an object I pop the laser on so I can see where it is. Slowly but surely I am learning where things are. Secondly others in my observing group can follow the laser to find the object.
I also fitted an attachment so that I could mount my camera on the scope.
A dew shield, heater and controller for the heater.
Now the down side.

Vibration when focussing. Because this is a single fork telescope there is a lot of vibration at high magnification.
Wind. Also because of the single fork issue this is also a problem. I do a lot of viewing by the sea and high winds cause problems.
Dew. A big problem with this scope and a dew shield and heater are a must.
The red dot finder is quite poor quality. It works intermittently and I intend to replace it with a reticule finder.
Extra bits to buy.

Dew shield.
Heated strap.
A Moon filter because this scope is so good it will hurt your eyes without one.
Nebula filter, if DSOs are your thing!
Finally. I bought a Celestron Power tank and found that the cigarette lighter popped out continually causing me to lose power so I stripped it down and attached it to the positive and negative screws. Far better!In conclusion this is an exceptionally well built telescope. It is big enough to see everything in Turn Left at Orion but not so big that it can’t be carried as a whole. It is very easy to align and in general the goto is very accurate.