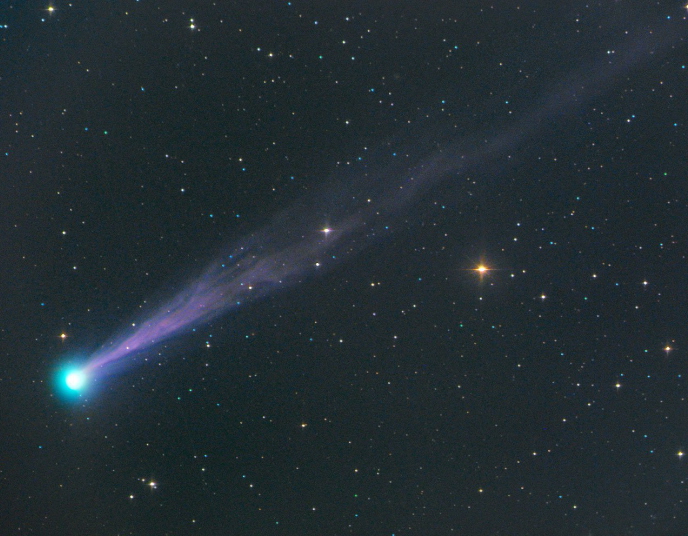 A COMET TO ENJOY
by Martin McKenna

Comet SWAN is currently the brightest comet in the night sky and its swim through the evening sky keeps it very well placed for observation in the UK. This comet has caused much interest among comet enthusiasts since it emerged from behind the sun during late September with its magnitude running brighter than predicted. With your binoculars and telescopes why not follow this fleeting visitor from night to night as you trace its ghostly tail passing through a background of stars and galaxies.

This comet is new – it arrived straight from the Oort cloud making its very first journey into the inner solar system. New comets can be unpredictable and they do tend to be at their best post perihelion so keep an eye on SWAN and enjoy its presence in our skies and tip your hat in acknowledgement before it plunges into the darkness of space beyond the planets – we will never see it again!

Michael Mattiazzo and Rob Matson found an object in SWAN images from late June 2006, which was found on images taken by Terry Lovejoy on June 30. The comet was confirmed with images taken by Rob McNaught with the Uppsala Schmidt on July 12. It passed through the SOHO LASCO coronagraph field between August 11 and the end of the month, but was barely visible.

It emerged from conjunction in mid September as an 8th magnitude object in the morning sky.
David Storey recovered the comet from the Isle of Man on September 15th 2006. His image showed the comet close to the predicted track, well condensed and about 8th magnitude. Martin McKenna observing from Northern Ireland on September 26 reports a naked eye observation and a 30′ tail in binoculars during a morning observing session.

Given good conditions comet 2006 M4 is now an easy object in the dawn sky however observers in the UK should now be able to view it in the evening sky as a magnitude 5 – 6 object in October and will remain visible until early January when it will fade from view. Recent visual observations report a compact well condensed coma with stellar false nucleus with a beautiful turbulent Ion tail 1 degree (2 moon diameters) in length with delicate streamers.