Mars has two moons, Phobos and Deimos. These are very small, about 20 and 10 km across respectively. They are also much closer to Mars than the Moon is to the Earth. Phobos, in particular, is close enough to cause annular eclipses of the Sun where as much as 40% of the solar disk is hidden from view. To an observer on the surface, the entire event would last no more than about 30 seconds during which an irregularly shaped silhouette transits across the Sun.

These phenomena are particularly sensitive to observer location on the surface. Even a few kilometres or just 2 degrees difference can result in an eclipse that is shorter or longer, occurs earlier or later, or doesn’t occur at all. This property can be used in determining one’s geographic (or areographic) location, just as the GPS satellite network provides positioning and navigation services anywhere on the Earth.

In context: The Beagle 2 mission

An experiment of this kind will be attempted early in 2004 by instruments on the Beagle 2 lander. The spacecraft was launched piggyback on the Mars Express orbiter aboard a Soyuz rocket on June 2nd this year and is expected to land on Christmas Day 2003 within an area measuring roughly 110 by 60 km wide. It’s exact position on the surface will be unknown and can only be determined precisely after the lander arrives. Radio tracking is the usual method of location determination of other planets; however in this case, the situation is significantly more complicated by the fact that Beagle 2 cannot communicate directly to the ground. It can only send its data back as quick bursts to the Mars Express orbiter which then relays it to Earth. Eclipse observations offer a handy alternative to radio tracking.

When, How and What?

The lander’s nominal operational lifetime is 180 Martian days or sols. During this period, the shadow of Phobos scans the Martian disk facsimile-fashion, slowly moving south at the end of northern hemisphere winter, crossing the equator at spring equinox in March 2004. It will pass through the latitude of Beagle 2 (approximately 12 degrees North) in early February 2004. 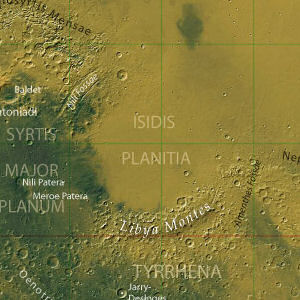 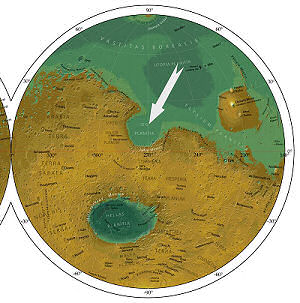 The opportunity then presents itself to observe several eclipses during that period using a UV photometer instrument which is part of the Environmental Sensor Suite or ESS package. Near times where eclipses are anticipated, the acquisition of several minutes of data will ensure that the eclipse is recorded from anywhere within the landing area. Observing two such events will be sufficient for an unambiguous determination of the landing site to within 10 km. At the same time, the entire ESS package will be monitoring atmospheric temperature, pressure and wind speed for any eclipse-induced changes.