Now that we have entered the beginning of June, members should be on the lookout for Noctilucent Clouds. Nocti and lucent are derived from the Latin where they loosely translate to night and luminous, hence “night shining clouds”.

They are the highest clouds in the Earth’s atmosphere, located in the mesosphere at altitudes of around 85 km, and are visible only when illuminated by sunlight from below the horizon while the ground and lower layers of the atmosphere are in the Earth’s shadow; otherwise they are too faint to be seen. Noctilucent clouds are not fully understood meteorological concepts. Clouds generally are not able to reach such high altitudes, especially under such thin air pressures.

They were first observed in 1884, but there has been a steady rise in their frequency ever since the mid 1960’s, or maybe it’s just that from then observers started to notice them! They are fundamentally different from the usual tropospheric type clouds, which appear dark at night, and can in fact sometimes be seen silhouetted against the NLC making a lovely photograph. 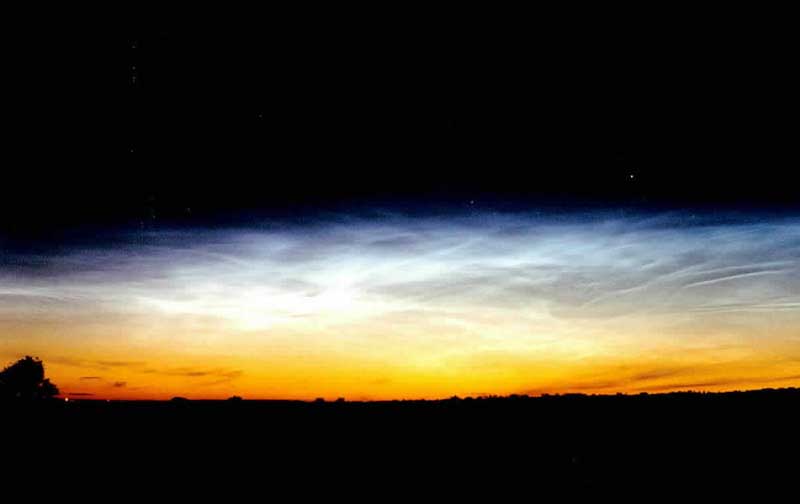 They appear pearly white in colour, and can be of very delicate shapes sometimes resembling a “Herring Bone” appearance. The upper limit of the clouds can sometimes also be of a lovely blue colour intermingled with streaks of silvery white. 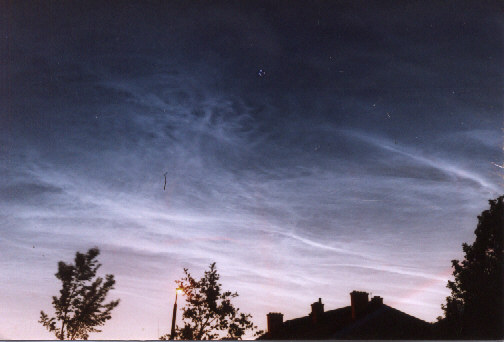 The NLC season runs from roughly late May until late July, but may also be seen in early August but this can be rare. The normal latitude zone for observing NLC displays from is latitude 50 to 65 with 55 to 60 being most favourable. North of about 60, it does not get sufficiently dark during the middle part of the season, so they can be difficult to see. NLC displays can also be seen from the corresponding southern latitudes with the season being December and January rather than June and July. Also, as there are fewer landmasses most of the displays are recorded by ships in the area.

NLC can be observed in various ways, but undoubtedly the easiest way is just with the naked eye, as like aurora they can spread right across the northern horizon from north east to north west, and the altitude due north can be several degrees, with the star Capella frequently appearing to be embedded in them. The best way to observe visually is to make drawings at intervals e.g. every fifteen minutes. On the drawing, the extent of the display in azimuth and altitude should be noted e.g. azimuth 330 to 025, altitude 2 to 20. The brightness of the display (and its various parts) should also be noted on a scale 1 (faintest) to 4 (brightest) as should the type of NLC (A = featureless, B = linear, C = cross-hatched, D = ‘whorly’). Any other features of note should also be recorded.

To photograph them is easy; all that is needed is a camera that can take time exposures of several seconds, and a tripod to keep the camera steady. It is also useful to have a wide-angle lens, something like a 50mm f.2 or 2.8; the later should get most if not all of the display into one frame. As you are photographing at night, you will need a relatively fast film, something like ASA200 or 400 and exposures in the order of 10-15 seconds depending on the brightness of the display, but it is best to bracket them. With a faster/slower film, the exposures can be decreased/increased.

This is ok if all you want to get are some “pretty pictures”, which can be taken anytime during the display, but if you want to take pictures that are of some scientific value then you need to go about it slightly differently. If the pictures are taken within a second or so of each quarter hour e.g. on the hour, quarter-past, half-past and quarter-to, and another observer, elsewhere, has done the same thing then “triangulation” can be carried out. From a single photograph of an NLC display, only the direction from the observer to the clouds can be determined. But from two such photographs, the exact position of the display in three-dimensional space can be worked out. Thus it can be inferred which point on the Earth’s surface they are and the height of the display can also be determined.

It is thought that NLC’s exist at a temperature minimum in the Earth’s atmosphere. If the NLC height were to change, it would indicate a temperature change in the structure of the atmosphere, so the height of a display could be a possible warning of global warming and other effects.

In the UK, NLC reports are dealt with by the Aurora Section of the British Astronomical Association and in particular by the deputy director, Dr David Gavine, 29 Coillesdene Crescent, Edinburgh, EH15 2JJ.

For more information and to submit your sightings, check out the UK NLC website.

My Early Years In Astronomy by John McConnell FRAS

Choosing a telescope By Andrew Johnston