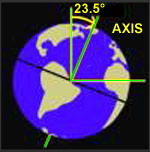 Our planet takes just over 365 days to orbit the Sun – the basis of our calendar year.
The Earth’s axis is tilted at an angle of 23.5 degrees.
This means that different parts of the globe receive varying amounts of sunlight during the year, creating the seasons.

Day and night
Imagine a rod going from the north pole through the centre of the Earth and out of the south pole. Over the course of 24 hours, the planet spins once around this central rod or ‘axis’. When we’re facing the Sun, the sky is light and it’s daytime. Then we turn away from the Sun and it’s night.

Years and seasons
The Earth takes 365.24 days to move around the Sun once and end up back in the same position. This is the basis of our calendar year. The extra 1/4 day is added every four years to make a leap year of 366 days. After 100 years the calendar and the true position of the Earth/Sun is in error by 1/4 day, therefore there is only a leap year at the turn of a century if the number is divisible by 400. e.g. 1900 was not a leap year but 2000 was.

We divide the year into seasons. Many people think that some parts of the year are hotter because we’re nearer to the Sun. But the real reason is that the Earth is tilted at an angle relative to the Sun.

An equinox in astronomy is the moment when the Sun is located right over the equator. The event occurs twice a year, around March 20 and September 23. More technically, the equinox happens when the Sun is at one of two opposite points on the celestial sphere where the celestial equator and ecliptic intersect. In a wider sense, the equinoxes are the two days each year when the center of the Sun spends an equal amount of time above and below the horizon at every location on Earth. The word equinox derives from the Latin words aequus (equal) and nox (night).

In practice, at the equinox, the day is longer than the night. Commonly the day is defined as the period that sunlight reaches the ground in the absence of local obstacles. This is firstly because the Sun is not a single point of light, but appears to be a disc. So when the center of the Sun is still below the horizon, the upper limb is already visible and emits light. Furthermore, the atmosphere refracts light downwards, so even when the upper limb of the Sun is still below the horizon, its rays already reach around the horizon to the ground. These effects together make the day about 14 minutes longer than the night (at the equator, and more towards the poles). The real equality of day and night happens a few days towards the winter side of the equinox.

For a detailed and technical article explaining our orbit around the Sun check the Wikipedia article Equinox.

There are a few reasons why seasonal dates can vary from year to year.

The current seasonal lengths for the Northern Hemisphere are:

As you can see, the warm seasons, spring and summer, combined are 7.573 days longer than the colder seasons, fall and winter (good news for warm weather admirers).

However, spring is currently being reduced by approximately one minute per year and winter by about one-half minute per year. Summer is gaining the minute lost from spring, and autumn is gaining the half-minute lost from winter. Winter is the shortest astronomical season, and with its seasonal duration continuing to decrease, it is expected to attain its minimum value – 88.71 days – by about the year 3500.

Another complication revolving around the vernal equinox concerns the length of day versus night. We have been taught that on the first days of spring and autumn, the day and night are equal to exactly 12 hours all over the world.

Yet, if you check the calculations made by the U.S. Naval Observatory or the sunrise/sunset tables in any reputable almanac, you will find that this is not so. In fact, on the days of the spring and fall equinox the length of daylight is actually longer than darkness by several minutes. The reason for this is atmospheric refraction – the atmosphere acts like a lens, bending the light of the Sun and so making the Sun rise earlier and set later than it would if we had no atmosphere. Thus, thanks to atmospheric refraction, the length of daylight on any given day is increased by approximately six or seven minutes.

The central axis that goes through the poles is tilted at an angle of 23.5 degrees, so it’s not at right angles to the way we’re traveling. As we move around the Sun during the year, the amount of light each area of the planet receives varies in length. 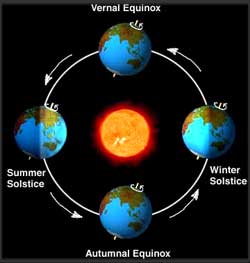 Image courtesy of the BBC

Summer
The day the north pole is nearest the Sun is called the ‘summer solstice’. Looking from Earth, the Sun reaches its highest point in the sky all year. This means it takes the most amount of time to cross the sky. So this is the day with the greatest number of sunlight hours. Its called the ‘summer solstice’ and happens around 21 June. This day is the start of summer and after this date, daylight hours start to decrease.
Autumn
As we continue our journey around the Sun, the north pole moves away from the Sun. The Sun rises lower in the sky so the number of daylight hours continue decreasing. When the Sun is at its mid-point in the sky, we reach the ‘autumn equinox’, around 22 September. Day and night are both 12 hours long and its the beginning of autumn.

Winter
The day when the north pole is furthest from the Sun is called the ‘winter solstice’. The Sun crosses the sky at its lowest point all year. Therefore it crosses the sky in the quickest time so this day has the least daylight hours. Winter solstice happens around 22 December and marks the start of winter. From then on, the number of daylight hours start to increase.
Spring
The Earth continues on its path, and our north pole starts moving towards the Sun again. The Sun moves upwards in our skies and the number of sunlight hours continue increasing. Again, we reach a midpoint when day and night are both 12 hours long. This is called the ‘vernal (or spring) equinox’ and happens around 21 March.

Seasons across the world

The further north or south you live in the world, the more pronounced the seasons are. For example, in the far north, Alaska has sunshine 24 hours a day during their summertime.

Why does the Earth tilt?
The Earth’s axis is tilted by 23.5 degrees and it’s a good thing it does! if the Earth did not tilt, countries near the poles would be cold and dark all year round. If it tilted too much, the seasons would be very extreme – like on the planet Uranus. Here the winter lasts for 42 years in total darkness!

The height of the Sun
As already explained, throughout the year the elevation of the Sun above the horizon varies such that in winter it is much lower in the sky than in summer. This effect, coupled with the slight elliptical orbit of the Earth, creates an unusual figure-of-8 in the sky. The graphic below shows the height of the Sun at midday throughout the year. This is called the analemma.

More on the Spinning Top
As you watch a spinning top, you will notice that the direction it points to varies as it slows down. So too with the Earth. Currently the direction of the north/south line of the Earth (the North Celestial Pole) is very close to the Pole Star, Polaris. Most of you will know that if you are looking at Polaris you will be looking in a northerly direction, but this was not always so. 6000 years ago, the NCP was in the constellation of Draco in between Polaris and Arcturus. This variation of the NCP is known as Precession and one revolution will take approximately 25,000 years.

Dark Matter (Why is it dark? Does it Matter?) – Dr. Steve Barrett